Greenlight > Games > bluebuttongames's Workshop
Greenlight is being retired. For more information on how to submit games to steam, refer to this blog post.
This item has been removed from the community because it violates Steam Community & Content Guidelines. It is only visible to you. If you believe your item has been removed by mistake, please contact Steam Support.
This item is incompatible with Greenlight. Please see the instructions page for reasons why this item might not work within Greenlight.
Current visibility: Hidden
This item will only be visible to you, admins, and anyone marked as a creator.
Current visibility: Friends-only
This item will only be visible in searches to you, your friends, and admins.
Polarity
Description Discussions7 Announcements10 Comments165 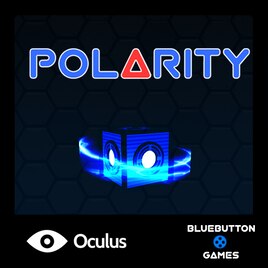 bluebuttongames
Offline
See all 31 collections (some may be hidden)

View Polarity in the store

Well there we are, the game will be finally released on Steam. It'll happen as soon as possible, hopefully before the end of the year, great thanks to those who voted!

To those that voted "no" or didn't vote, I look forward to seeing you snap up a copy for buttons in the 2018 summer sale.

Read More
Description
Release date: October 2013
Polarity is a first person puzzle game based around hacking into a secure virtual world to steal data fragments....for money. You play a glorified data thief essentially. Oh and it's also completely compatible with the Oculus Rift (which is actually pretty awesome).

KEY INSPIRATIONS
Absolutely none, this game is entirely original in every single way, no I've never heard of 'Portal' whatever that is.

CORE GAMEPLAY
Clues in the name really, you can invert your Polarity (colour) for a multitude of reasons including activating gates, escaping deadly lasers or creating a disco around your character on the fly.

LOCAL COOP
The plan is to release a campaign of suitably cooperative levels, I may even add 3-4 player coop puzzles just because it sounds like my mind will melt when I design them but it could also be pretty entertaining.

ACTUAL STUFF IN THE GAME
FAQ
Is this a joke?
Nope, this is a real game.

When will it be released?
If I make it through Greenlight as soon as I can muster.

How much will it be?
Around $10.
Popular Discussions View All (7)

How to derp
Katherine

Polarity has been Greenlit and is now listed in the Steam store. For the latest information, purchase options, and discussions for Polarity, please see it on the Steam Store or in the Steam Community.
Visit Store Page
For more details Visit Community Hub
For latest discussions
If you really, really want to, you can continue to the Greenlight page. Information on this page may be out of date, since all the action has moved to the areas noted above.