Store Page
Hearts of Iron IV>  Workshop > TommyTwoLegs's Workshop
This item has been removed from the community because it violates Steam Community & Content Guidelines. It is only visible to you. If you believe your item has been removed by mistake, please contact Steam Support.
This item is incompatible with Hearts of Iron IV. Please see the instructions page for reasons why this item might not work within Hearts of Iron IV.
Current visibility: Hidden
This item will only be visible to you, admins, and anyone marked as a creator.
Current visibility: Friends-only
This item will only be visible in searches to you, your friends, and admins. 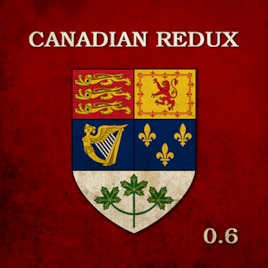 Hearts of Iron IV: Together for Victory

Hearts of Iron IV: Man the Guns
Created by

TommyTwoLegs
Online
See all 49 collections (some may be hidden)
You need DLC to use this item.

This item has been added to your Subscriptions. Some games will require you to relaunch them before the item will be downloaded.
Description
Version 0.6b - 10 AUG 2019

MOD PLACED ON HOLD
I'm pleased to see so many people using my mod. I originally created it for myself and figured that I would share it with other players who felt that the Dominion of Canada was lacking the same attention to detail awarded to countries like GER, ENG, USA, etc. The size of the mod has increased beyond what I originally intended, but it's been fun to work on. That said, I am switching my attention and modding efforts over to Imperator: Rome, which is forcing me to put this mod on hold for the time being. I will try my best to fix any bugs that may occur as future game patches are released, but do not expect any further content additions.

OUR OWN MONARCH
A small branch of seven focuses have been added to the Canadian national focus tree. This branch allows the player to adopt a Canadian monarch and make several decisions associated with such a change. It is not a huge departure from the TFV version of Canada, but it allows the player to choose something different from the typical democracy/fascist/communist routes.

PORTRAITS AND EVENT ART
Numerous original portraits have been added to the Canadian roster. Most of these are based on historical Canadian figures, including Harry Crerar, Andrew McNaughton, Guy Simonds and many more. A small number of fictional portraits have also been included including a portrait for Victoria II.

NOTES
• Though I haven’t tested it (and you may prove me wrong), I would assume that this mod is incompatible with a number of mods that alter common game files and certainly Canadian history files. If you intend to run this mod, understand that you’re just playing Canada for this campaign and temporarily disable other content mods. Cosmetic and QOL mods should be fine.
• Choose a 1936 start. This mod is geared towards a 1936 start and doesn't really change much if you begin in 1939. There's nothing stopping you from beginning in 1939, but you'll miss out on a number of the changes I've made.
• This is a growing mod. It is intentionally small-scale and is meant to change things up a bit for players who like to play as Canada. More changes will come down the road and I am open to suggestions from the HOI4 community. It is also difficult for one guy to bug test this thing under multiple scenarios, so if you find a bug, let me know.
< >
115 Comments

Dat Kinda Happy Anime Dude Apr 2 @ 1:34pm
I truly enjoyed this mod and would like to ask if an update is possible but its okay if its off the table its your decision and i support it

Waffelz Aug 24, 2019 @ 7:29pm
Can you change the flag for when you go down the added focus branch to just the regular one? The one you got now for it, no offense, is just kinda blaghh

CDNICE Aug 13, 2019 @ 7:00am
Awesome mod. If you need ship names I can provide, I have an extensive resource library where the RCN is concerned and am willing to do the work for inclusion if you are interested. Great work!

TommyTwoLegs  [author] Aug 10, 2019 @ 11:24pm
@Doctor Dummkopf Are there any bugs as a result of the new patch? I played around with it and couldn't find any. If that's the case, I'll just bump up the mod's client number to 1.7.1 so it stops saying it's incompatible.

TommyTwoLegs  [author] Jun 15, 2019 @ 8:05pm
Sorry for the delay in getting this out to you guys. The mod has been updated for HOI4 Version 1.7.0 and the error caused by Paradox's coding change has been fixed. If any new bugs are found, comment.