Store Page
Hurtworld >  Workshop > Mister Mo's Workshop
This item has been removed from the community because it violates Steam Community & Content Guidelines. It is only visible to you. If you believe your item has been removed by mistake, please contact Steam Support.
This item is incompatible with Hurtworld. Please see the instructions page for reasons why this item might not work within Hurtworld.
Current visibility: Hidden
This item will only be visible to you, admins, and anyone marked as a creator.
Current visibility: Friends-only
This item will only be visible in searches to you, your friends, and admins. 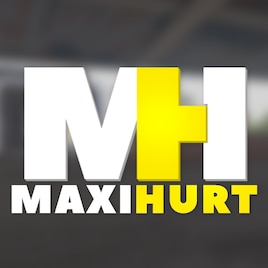 Akumu
Offline
See all 7 collections (some may be hidden)

This item has been added to your Subscriptions. Some games will require you to relaunch them before the item will be downloaded.
Description
In this mod there are:
• Maxi Rubles - The game currency of the server, which is issued over time spent in the server and allows you to exchange for currency in the online store[maxihurt.ru].
• Tactical Armir - Standard clothing models with the addition of improved characteristics.
• Improved tools:
- Mining Bow that allows you to extract resources at a distance
- A pickaxe that auto-smelts collected ore and auto-burns collected bark into ash, as you farm it.
• Unique weapons:
- AK-12 assault rifle - A version of AK12 with increased damage and reduced rate of fire, which allows better control of recoil. Additional modules: Magazines of increased capacity for 40 and 96 rounds, a handle for improving stability, silencers.
- ASV "Val - High-precision and high-speed weapon, extremely effective at short distances.
- VSS "Vintorez" - Silenced semi-automatic sniper rifle for short and mid range.
- Glock 17 - A tier 2 pistol with increased damage (compared to the M9) and additional modules.
• Unique grenades and explosives:
- Smoke grenade - Allows you to create areas of smoke for tactical maneuvers.
- Supply Signal - You throw it and it creates pink smoke for a couple of moments, then an air drop arrives near the location.
- Bomb - Throwable; Does approximately 20% of one C4 damage, however its splash damage direction depends on how the bomb lands.
- Dynamite Bomb - Similar to the bomb, but it attaches to the wall for more consistent 20% C4 damage. Will still blow wood wall in 1 or 2.
- Raid rocket launcher - Raiding talon rockets can be crafted and launched from this. They do between 40% and 60% of 1 C4 damage.
• Unique items that enhance your stats:
- Beer - Increases protection against heat.
- Hot-water bottle - Increases protection against cold.
- First-aid kit - Gradually restores your HP in large quantities.
- Anesthetic - Gradually restores your HP in a small quantities.
- Power Engineer - Increases your movement speed.
• Special events, both of which are displayed on the map as they are happening.
- Jet Crash - A jet that crashes from the sky and stays hot. You must wait for it to cool before you can loot it.
- Radiation Shack - A shack that spawns, you need to click on the door and start the countdown timer in 5 minutes, after 5 minutes if no one tries to open the door, then inside there is loot for the player.

spardanviro Dec 28, 2020 @ 11:38pm
@CaptainNebulous Do you know where to purchase the private version mod?

All4Catastrophe Aug 12, 2020 @ 3:15pm
Loaded this mod onto my running server, when server was launching got a ton of red errors, got into game and all bases were missing base parts basically server was destroyed good thing I backed it up before hand. So either one this mod breaks current running servers by deleteing player base parts in current use. Or Mod works but on a fresh wiped server. Can anyone give me feed back on this?
< >