Store Page
Tabletop Simulator >  Workshop > GeekSpiel's Workshop
This item has been removed from the community because it violates Steam Community & Content Guidelines. It is only visible to you. If you believe your item has been removed by mistake, please contact Steam Support.
This item is incompatible with Tabletop Simulator. Please see the instructions page for reasons why this item might not work within Tabletop Simulator.
Current visibility: Hidden
This item will only be visible to you, admins, and anyone marked as a creator.
Current visibility: Friends-only
This item will only be visible in searches to you, your friends, and admins. 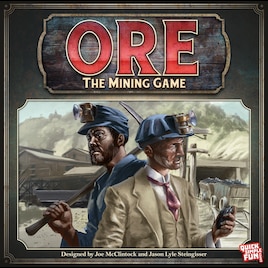 This item has been added to your Subscriptions. Some games will require you to relaunch them before the item will be downloaded.
In 1 collection by GeekSpiel
Geek Spiel - 2019 Games of the Week

4 items
Description
In Ore: The Mining Game, players assume the roles of clever industrialists competing for fame and fortune. Ore takes place during the industrial revolution, and aims to simulate the complexities of effective supply chain management.

Players take turns carefully placing their workers on one of several "location" cards:
- In mines, to collect one of five different resources (lead, coal, copper, iron, or gold);
- In distribution, to secure lucrative contracts that allow for players' operations to scale.

Each player starts with $5+ and 4 workers. Early on, players have very limited means. However, by mining resources, acquiring assets, securing contracts, and expanding their operations through new initiatives, players become more readily able to generate more and more amounts of income.

The game ends at the end of Turn 7.

At that point in time, the player with the greatest amount of victory points from buildings, Money, and completed contracts is declared the winner.

Big thanks to GamesByRay for the awesome scripting.
< >
2 Comments

One thing though, more than two players bugs out the setup script. Spits out a error.
Two players works fine though.