Store Page
ARK: Survival Evolved>  Workshop > Pikkon's Workshop
This item has been removed from the community because it violates Steam Community & Content Guidelines. It is only visible to you. If you believe your item has been removed by mistake, please contact Steam Support.
This item is incompatible with ARK: Survival Evolved. Please see the instructions page for reasons why this item might not work within ARK: Survival Evolved.
Current visibility: Hidden
This item will only be visible to you, admins, and anyone marked as a creator.
Current visibility: Friends-only
This item will only be visible in searches to you, your friends, and admins. 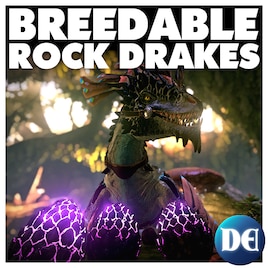 Pikkon
Online
See all 213 collections (some may be hidden)

This item has been added to your Subscriptions. Some games will require you to relaunch them before the item will be downloaded.
Description
Commissioned by TheDragonQueen for use on the DarkEdgeTV Sub Servers. Open for anyone to use.

This mod is a core style mod that overwrites vanilla Rock Drakes, making them breedable. It also adds extra colors to them.

It also adds a Rock Drake Conversion item that, when used on an existing vanilla Rock Drake, will make it breedable. The resulting egg will be an egg from this mod, so there is no need to keep feeding the children the conversion item.

While this is a core style mod, this mod only needs to be put before any other mod that might affect vanilla Rock Drakes. Of course, as with all core mods, the higher up the better.
Popular Discussions View All (2)

I set both Drakes to "mate" and nothing happens.

Vas Dec 23, 2019 @ 11:03pm
So how does the conversion work, does it swap the Rock Drake with the one from your mod but keep all the same colors and other stats? I expected the rock drake to be respawned or something, but nothing happened at all, I couldn't tell a difference between them. It was rather interesting.

However, I could keep feeding them the convert item, I thought it was disabled for anything except the non-breedable rock drake.

and where do they spawn ?

Pikkon  [author] Jul 9, 2019 @ 12:44pm
I can. But this mod was commissioned by TheDragonQueen (meaning she compensated me to create this). I wont just be randomly be making mods like breeding karkinos.