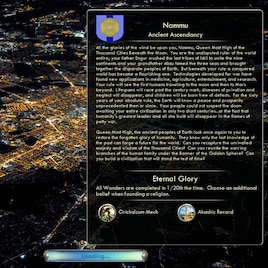 This item has been added to your Subscriptions. Some games will require you to relaunch them before the item will be downloaded.
In 1 collection by lordnequam
Super-Civilizations (Brave New World)

3 items
Description
A unique super-culture possessed of advanced technology and game-breaking advantages. Please note that this civ is NOT balanced against the others in the game. Only use it if you want serious advantages against the game. Alternately, set it as your foe for a truly daunting challenge.

New Leader: Play as Nammu, Queen Most High of the Ancients. Due to my lack of artistic ability, the part of Nammu will be played by Dido of Carthage.

New Trait: Eternal Memory - Build all Wonders in 1/20th the time. Additionally, the superior spirituality of the Ancients allows you to select an additional belief when founding a religion.

New Building: Akashic Record - The cornerstone of every Ancient city, this replacement for the Monument provides an early-game boost with a +3 to food, happiness, production, gold, faith, culture, and science and a 25% boost in the production of Great People.

Q: I have installed the mod and activated it correctly, but Nammu isn't showing up under the list of leaders.
A: I've done some digging around the internet and it seems like this is a not-unheard-of problem with Civ 5 custom civilization mods in general. First, ensure that you have the Gods &amp;amp;amp; Kings expansion installed and activated. If that does not work, try to unsubscribe the mod, clear your cache, and then restart Steam and re-subscribe to the mod. If you've done it correctly, the game will re-download the mod. If this does not work, then you have my apologies, but I have been unable to find any other solutions to the problem.
< >
52 Comments

Thunder Fist Maki Jan 1 @ 10:02am
Just finished a settler run with this civ (just doubling down on how OP it is) and I really enjoyed it.
However, I do like the aesthetic on its own and was wondering if you would consider making a more balanced version?
Some suggestions:
1. Change the Trait so it's not just Egypt on steroids; maybe every wonder gives a production boost on future wonders?
2. Bring the building down to +1 of everything (which is still really powerful for the early game); GP boost is fine to keep
3. Robot is fine as long as a civ that outnumbers you with their own robots can still take you down

Sidewinder Fang Dec 12, 2018 @ 3:44pm
The mod doesn't appear to give the orchalcum mech anymore when you start a game, I tried removing all my other mods and its not a mod conflict.

king_moogle Oct 31, 2017 @ 1:57am
Was wondering if you would be willing to make this very mod for Civ 6, or if you are in the process of developing it. (Since they changed a lot of things.)

goldclaw07 Mar 8, 2016 @ 1:56am
Mod isnt Broken Steam isnt installing it into the Civ File cant figure out why trying to find where they go when installed now

Chucktheninja Jan 28, 2016 @ 8:20pm
Yeah this mod is broken for me. I can chose the civ and start it up but when i select units it switches map views. And all my units (including not combat units) have 20 different promotions availiable and clicking any of them all makes it automate and i cant get it to go away.