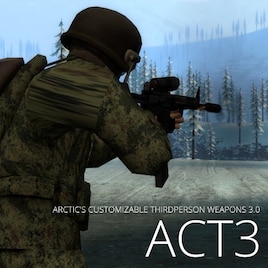 This item has been added to your Subscriptions. Some games will require you to relaunch them before the item will be downloaded.
In 1 collection by Arctic
ACT3 Official Collection

7 items
Description
"I love firing guns. It's an amazing feeling - so sexy and powerful."
- Hayley Atwell

A feature-packed weapon base with bullet-by-bullet magazines, customization, physical bullets, and much more.

Overview
This mod aims to be to ASTW2 as ASTW2 was to ASTW1. With an overhauled camera system, comprehensive bullet-by-bullet magazine system, physical bullets, a versatile customization system with attachment inventory, and the new True Irons system, this is a weapon mod like you've never seen before.

Serious effort has also been made to ensure that NPCs can use weapons from this mod just as well as normal weapons, including receiving randomized attachment loadouts.

Every attempt has been made to optimize this mod, but it WILL incur far greater network traffic than a normal weapon mod simply due to the fact that there is far more data that needs to be sent.

While the mod works in multiplayer and with NPCs, due simply to its sheer complexity, bugs are bound to arise. I work tirelessly to try to fix them, but they will always slip through the cracks. However, in single-player, without picking up any NPCs' guns, it should still work flawlessly.

Features
- Customization: Customize nearly all weapons with stocks, handguards, grips, sight rails, lasers, and more.
- Convert Weapon Props: Due to the thirdperson nature of this mod, ZERO model work should be needed to convert weapon props into real, functioning weapons.
- Attachment Inventory System: Not attachment locking - one flashlight is one flashlight!
- Great Variety: Base pack (Included) provides a wide range of weapons from muskets to pistols to sniper rifles and assault rifles to LMGs and GPMGs. Every effort has been made to cover all concievable niches.
- (Relatively) Small Filesize: It's a lot more than ASTW2, but at less than 50mb this mod should offer a great filesize to content ratio.
- Shotgun Reloads: Finally, you can reload one round at a time into guns that need it. The C96, K98, M3, Blackhawk and M1014 all have this feature, which has never been implemented in third person this way.
- Relative Camera System: You can walk directly towards the camera. Works just like in MGSV, or GTA. But not ArmA. Or Fortnite. For that, you'll have to turn it off.
- Bullet-by-Bullet Magazine System: Mix-and-match ammo types in your magazines.
- Physical Bullets: Built from the ground up to support physical bullets, with dozens of different rounds with unique ballistic profiles. Bullets appear to travel into the 3D skybox.
- Penetration: Custom-tailored, based on guns' armor penetration. Use 'developer 1' in console to see the penetration traces.
- Works in MP: You can see other players' guns, their attachments, and their lights.
- Compatible: This mod is compatible with Seat Weaponiser 2 and Prone Mod.
- NPC Integration: A new for Garrysmod, NPCs can be given weapons with custom attachment sets and ammo loadouts. You can even scavenge magazines from dropped weapons by walking over them.
- Underbarrel GLs: Finally.
- Weapon Saves: Save a particular setup to your computer so you can put it back on your gun easily, without the hassle you'd normally take.
- Tons of small details I'm not getting into here: Try switching firemodes even on things you don't expect to be able to do it on.

All other controls will be explained in the hints display at the top-right corner of the screen while in the menu.

FAQ
- I can't scroll in the menu: Make sure your invprev and invnext commands are bound. Make sure no other mod is interfering with controls.
- How do I go third/first person?: Go to Options/ACT3/Camera and select the preset from the top of the menu.
- How do I disable infinite ammo?: Go to Options/ACT3/Gameplay.
- Where can I find all weapon variables?: Look in the lua/weapons/act3_base/shared.lua file. You can also search in the default pack weapons for examples.
- What's the purpose of this?: In theory, you should be able to convert weapon prop packs with bodygroups directly into usable, customizable weapons.
- How many weapons are there?: Haven't counted lately. Loads.
- Playermodel? My Camouflage Man addon.
- Map? rp_truenorth, gm_boreas.
- Font? Open Sans.
- Will you add XYZ weapon? No.
- What does this require? Only CS:S, but you'll get a better experience if you also have DOD:S.
- Weapons do no damage. Any addon that messes with bullet callbacks will do this. There is literally nothing I can do about it.
- Higher quality audio? Try EAR. It works fully with this mod and gives it much better sounds!
- Does this obsolete ASTW2?: Yes. There should no longer be any real reason to use ASTW2 over ACT3. You can still use them together, and ASTW2 will respect ACT3's camera sensitivity settings if you choose to use them.

Incompatibilities
Half Life SNPCs. Makes all weapons do 1 damage. - NOW WITH A FIX!
Any external physical bullets addons. Unless you add ACT3's weapons to its blacklist.
Any third person camera mods. If you have both ACT3's camera and theirs enabled at once you will have a bad time. You CAN disable the ACT3 camera and have a different one if you like, but I highly recommend against this since it'll break True Irons, relative motion, and mess with a whole host of other features.
Any mod that doesn't respect bullet callbacks. ACT3 needs a lot of special code for the bullets to work. Mods that strip this code out will obviously break it.

Samurai Blue Oct 8 @ 4:22pm
There not working i can relaod them but i cant pull up the menu or shoot it and if i reload it it makes this spaming sound.

dragonrage519 Sep 17 @ 10:00am
oh, another good thing is indeed the shotguns, one by one shells instead of somehow reloading like 12 with a single shell

dragonrage519 Sep 17 @ 9:59am
Honestly, I prefer the previous version for a few reasons, 1, the models on this are of a lower quality by the looks of it, 2, when turning but not moving, there is no foot shuffle, or movement of any sort, you simply just...rotate, as if on a rotating platform, 3, the melee animations could use some work for sure, swinging the lead pipe causes even vanilla models to look as if their left arm is broken or at best dislocated, and most of all, overall movements seem a bit beta. However! this does not mean that I don't like the mod, as it does certainly make aiming much easier, even with weapons that don't have a scope, and the UI doesn't look bad either (Ive seen some that are ugly like you wouldn't believe). So, awesome work, but far from perfect, I still plan to keep this mod nonetheless

dragonrage519 Sep 17 @ 9:52am
Problem, I tried to give myself the axe, and it came up with that beautiful red error instead

Balloon Snake Sep 14 @ 5:04pm
Love this mod, but how do you use the surface-to-air missiles? I lock on with the heat scope and fire when I am fully locked on and they just fall to the ground. I am trying them on Gredwiches stuff planes, do they only work on the HL2 air vehicles?

AwesomeToast B Aug 21 @ 9:14am
To fire underbarrel attachments you press B to change to it