Store Page
Kenshi >  Workshop > timor1234's Workshop
This item has been removed from the community because it violates Steam Community & Content Guidelines. It is only visible to you. If you believe your item has been removed by mistake, please contact Steam Support.
This item is incompatible with Kenshi. Please see the instructions page for reasons why this item might not work within Kenshi.
Current visibility: Hidden
This item will only be visible to you, admins, and anyone marked as a creator.
Current visibility: Friends-only
This item will only be visible in searches to you, your friends, and admins. 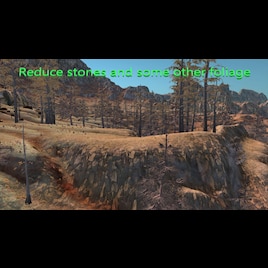 This item has been added to your Subscriptions. Some games will require you to relaunch them before the item will be downloaded.
Description
Reduce stones and some other foliage
This mod reduces most of the stones and boulders in game. It also touches upon other foliage I didn’t like.

I don’t want my game to feel empty but at the same time I just don’t like some of the foliage in game. So I removed and in other cases reduced those. I mostly haven’t touched any trees or grass. But I really hated some of the dead trees because of the ugly mesh and one grass type that grows on all the cliffs, so I have removed them and there are some others that I have reduced.

This mod will improve your loading times and FPS, degree of improvement will vary from system to system.

You will want to import because I had to do some level editing.

Compatibility:
I have done some level editing to remove floating buildings and fix some clipping issues.

Load Reactive World after this mod to avoid compatibility issues.

Kenshi Architecture Mod will cause a couple floating buildings in some cities. A patch is needed to fix that.

Cities Rebalanced mods will cause a couple floating buildings in some cities. A patch is needed to fix that.

Project Genesis will cause issues with this.

License/Permissions:
Do not reupload this mod without permission.

If anyone wants to make a patch between this and other mods you are free to do so.

If somebody wants to translate this mod into other languages and post it, you have permission to do it, just mention the original mod somewhere in the description:)

Thundercraft Mar 29 @ 5:50am
@vanmore Have you tried to import your game to see if that would fix it?

vanmore Mar 28 @ 3:15pm
I instakked mod, but world looks too much naked with it, so i deinstalled mod. The problem is, textures had not returned back. How do I get 'em back? I have almost vanilla version, just 3 mods which are: 1) Compressed Texture Project; 2) Particle Fix; and 3) Reduced Weather Effects

Thundercraft Mar 20 @ 3:51am
I get that this will cause issues with Kenshi Architecture Mod, Cities Rebalanced or Project Genesis. I do not use any of these. But can anyone tell me if this is likely to cause similar issues with other mods that add new buildings or build new towns where there used to be only wasteland or wilderness?

SiberianMouse Jan 6 @ 6:39pm
genesis is a trash mod but this is too cause look at that naked ass world