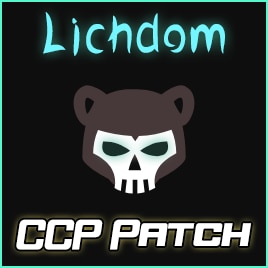 23 items
Description
This is a compatibility patch that makes Animations Plus, Majoras Character Creation Plus, and Lichdom (Beta) work together nicely.

Specifically, the Origin character versions of the Lich "race" will have CCP appearance options, and start with their default appearances when transforming, i.e. Red Prince will be a red undead skeleton, Beast will be undead and have his beard/hair, and so on.

I recommend grabbing Fort Joy Respec - Definitive Edition if transforming in Fort Joy. The respec mirror is needed to generate new portraits and fix up your appearance/color settings after transforming.

There's a few caveats, due to Larian's transform functions being a little weird:

Required Mods + Recommended Order
Lichdom + this patch need to go after CCP. Animations Plus can go before or after CCP, but before may be the best, since it overrides base skeletons, which then CCP references in its visual sets (the base skeletons, not anything from Anim+ exclusively).

I love modding this game, and I love interacting with the community. Every bit helps to keep me doing what I'm doing. Thanks!

Patch Specifics
CCP works by overriding every visual set for the playable races/genders. For Origin characters to be able to transform into an undead equivalent (and not lose their voices), Lichdom "transforms" them into an undead template. Some characters need some specific visuals to be able to work right, such as The Red Prince needing the exact red skin color he's set to - If he doesn't have that skin color, his skin turns purple, and you're unable to change it.

So what this patch does it copy all of CCP's related undead visual sets to new resources, add in the missing bits, and set the Origin templates to use these visual sets instead. That allows you to have all of the CCP appearance options while keeping the Origin characters working as newly Undead.

Finally, down the road I may add some special Lich-only appearance options, and this patch will allow me to do so.

osman Oct 3, 2019 @ 6:33am
hi, first of all amazing mod but i have a problem. I prepared the load order exactly like you showed in desc. but even though this mod works i cant see the facial features i dont know why. I tried to unsub and subscribe again but didnt work what should i do ?

ShadwReaper Sep 19, 2019 @ 10:12am
is there someway to make the characters armor invisible so its only the lich model showing?

LaughingLeader  [author] Jan 20, 2019 @ 10:14am
I'll be doing a quick update today that will at least let you preserve your experience when transforming solo, since in that situation, I can add back the experience directly.

@Buzzkill Negative fire resistance is in actually. Added that in today's update. -25% with your phylactery up, -50% when it's broken. The host can disable it if they feel it's too detrimental.

Buzzkill Jan 20, 2019 @ 10:06am
Btw, I always loved when a game let you become a lich,i would love if there were options to have side effects, like more fire damage taken, or the option to keep a few original passives, but its all up to you really.
I'd love to sacrifice some fire resistance for some cold resistance, makes sense to me.

LaughingLeader  [author] Jan 20, 2019 @ 9:56am
Yeah, not really a bug unfortunately - Just the way the transform function works when _ReplaceStats is set to 1 (this is used to give Origin characters the same immunities / steps type / path influence as undead races).

I may be able to get close enough through adding multiple amounts of exploration experience in increments of 25/100/1000 etc, but really it'd be easier to just make sure you transform after leveling up (or right at the start when starting a new game).