280 ratings
MOD of "A Song of Ice and Fire": Rise and Fall of Usurper
Description Discussions3 Comments214 Change Notes 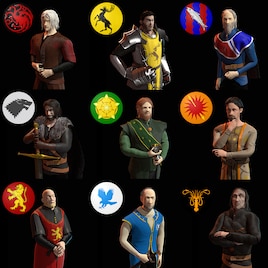 KCucumber
Offline
See all 139 collections created by furion1986 and other people (some may be hidden)
You need DLC to use this item.

This item has been added to your Subscriptions. Some games will require you to relaunch them before the item will be downloaded.
In 1 collection by furion1986
Furion1986's Mods of Ice and Fire

2 items
Description
IF YOU APPRECIATE THIS CONTENT, PLEASE SUPPORT ME HERE:
https://www.patreon.com/furion1986

This Mod adds Leaders Rhaegar Targaryen of the Crownlands, Eddard Stark of the North, Tywin Lannister of the Westerlands, Robert Baratheon of the Stormlands, Mace Tyrell of the Reach, Jon Arryn of the Vale, Hoster Tully of the Riverlands, Doran Martell of Dorne and Balon Greyjoy of the Iron Islands to R&F gameplay.

IMPORTANT: Please disable CQUI (which also overwrites city-state partial screen lua script, will have conflict then) or CIVITAS City-States Expanded (which enriches the types of city-states, but Lord Hoster has not enough daughters to send to these new types of city-states) when playing this MOD. Sorry for the inconvenience. 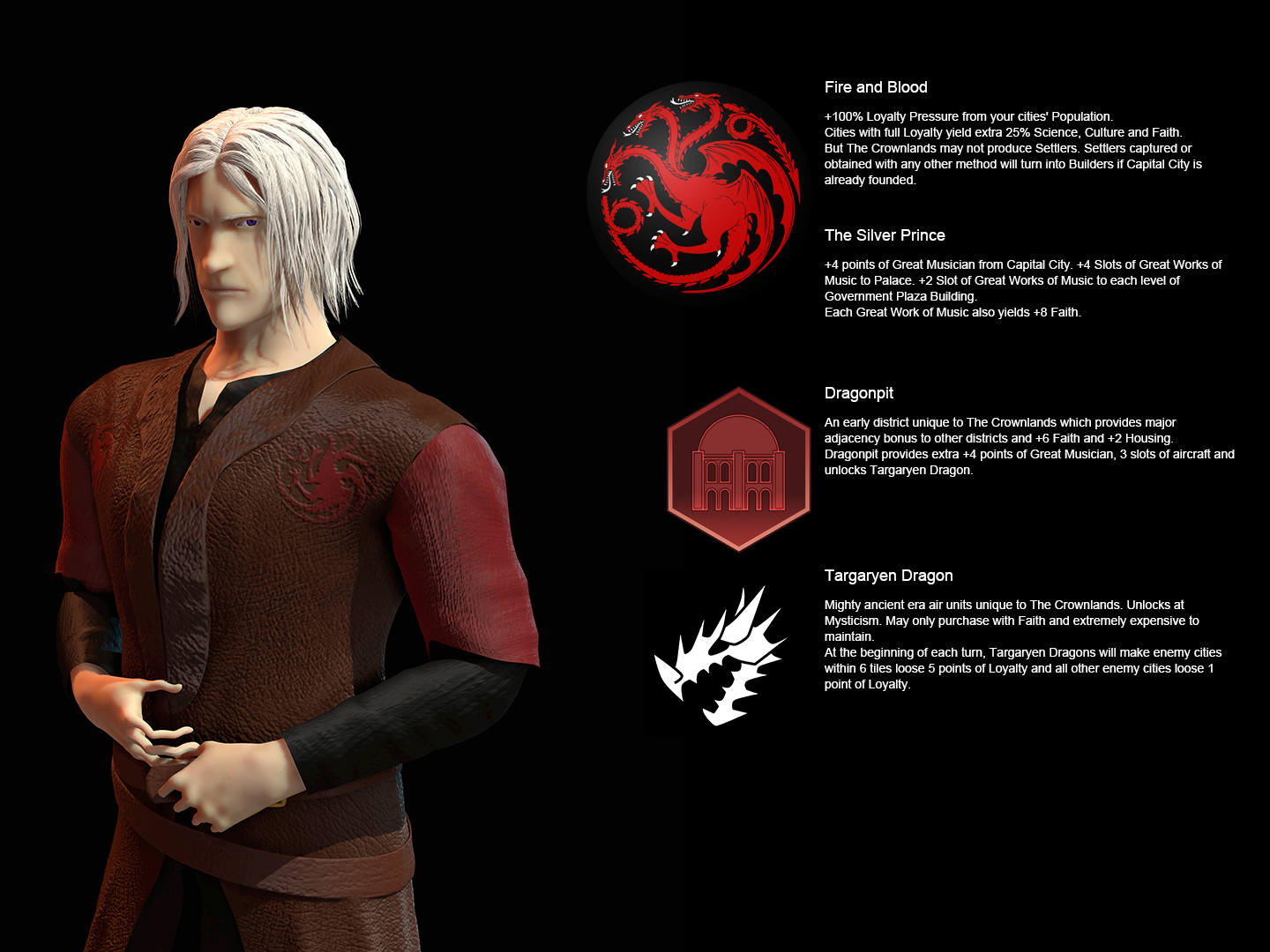 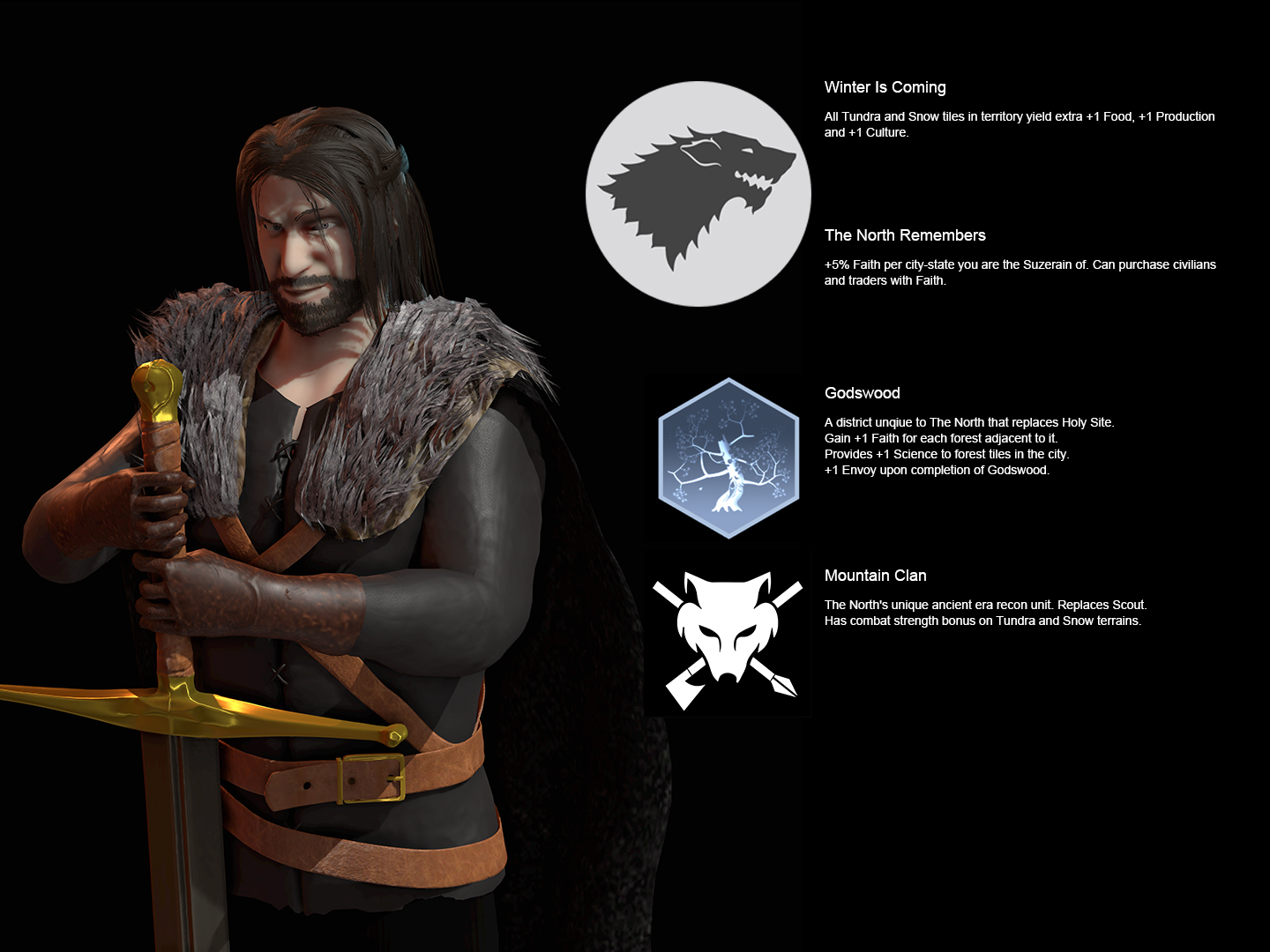 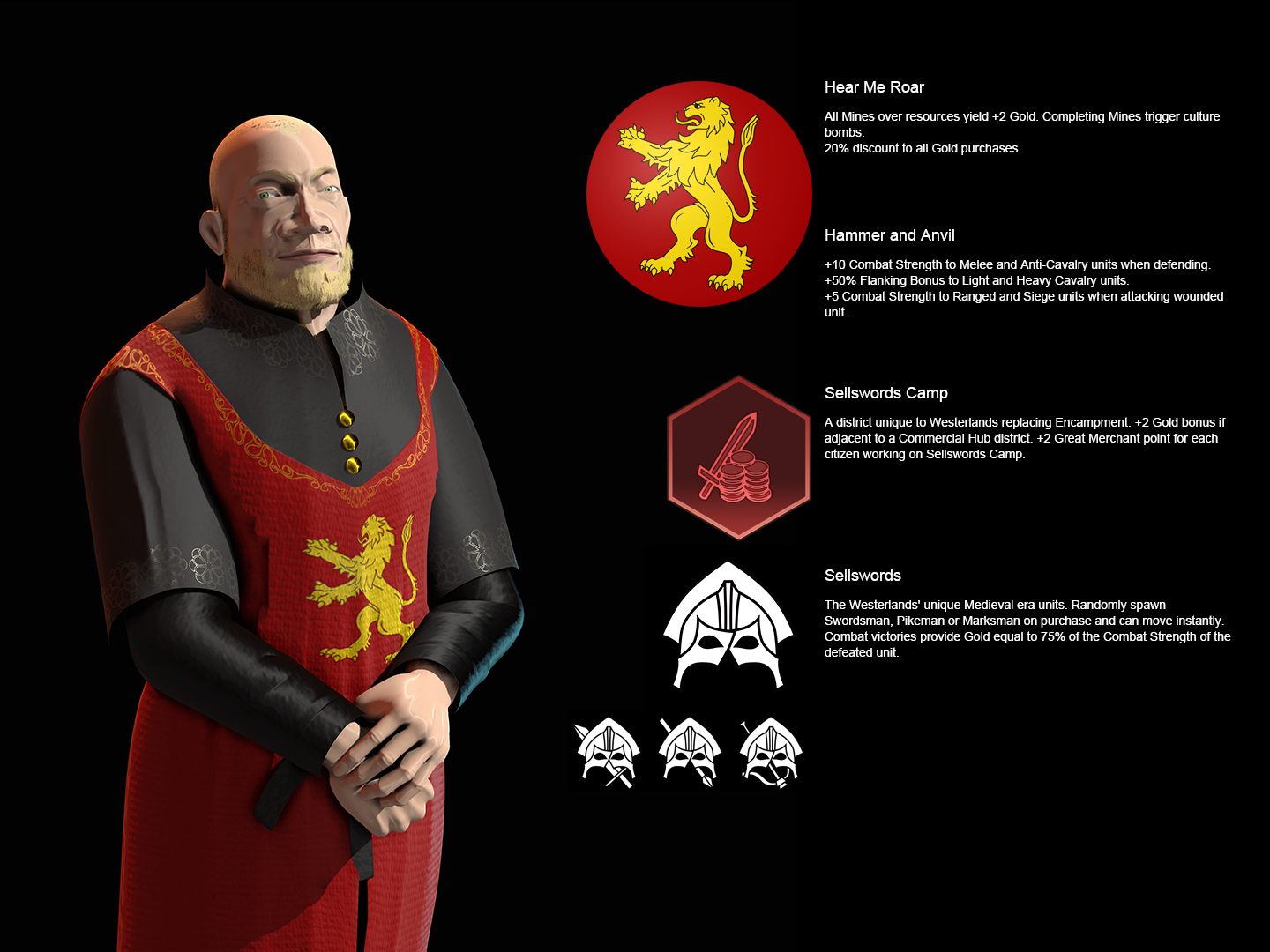 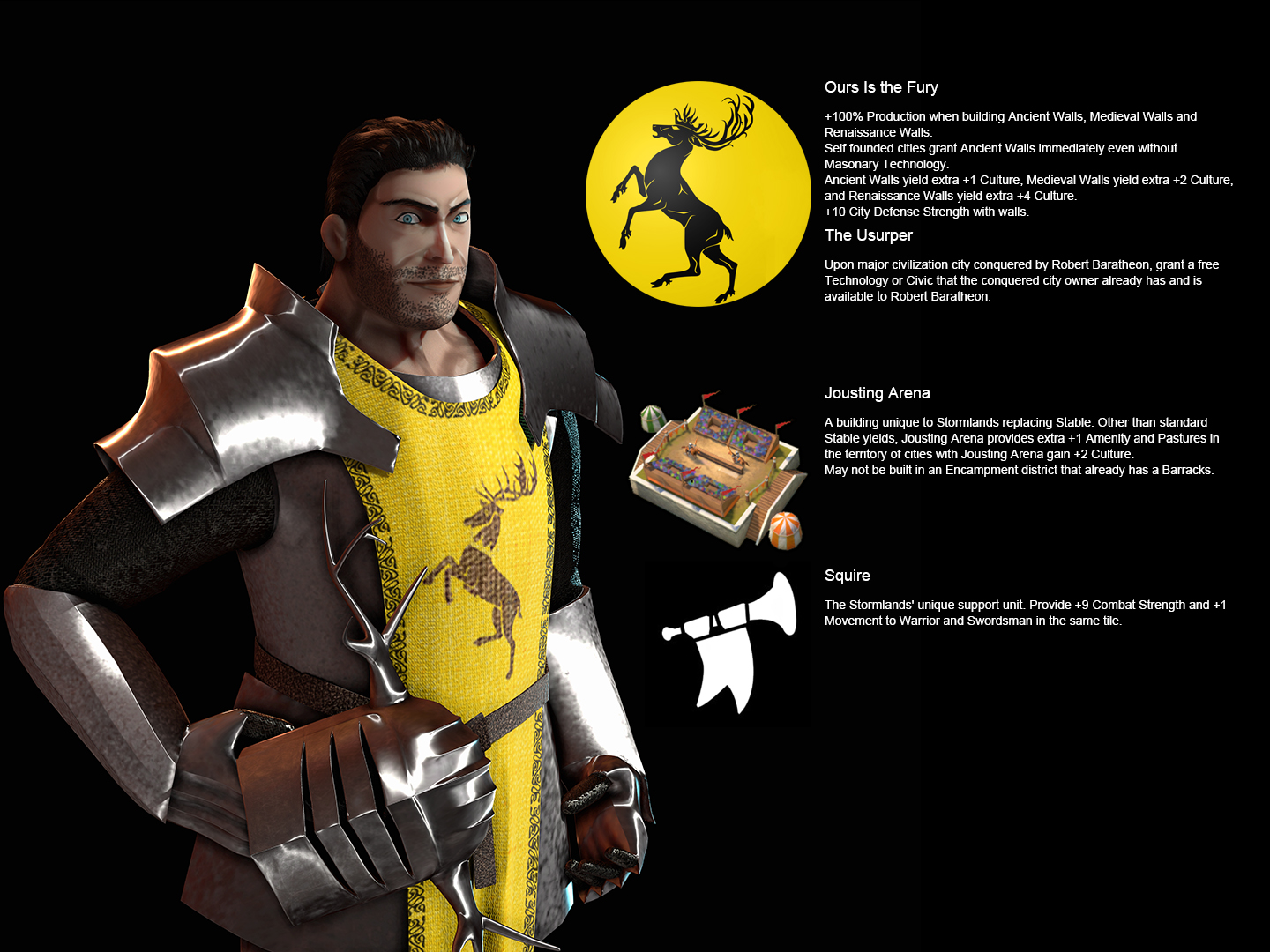 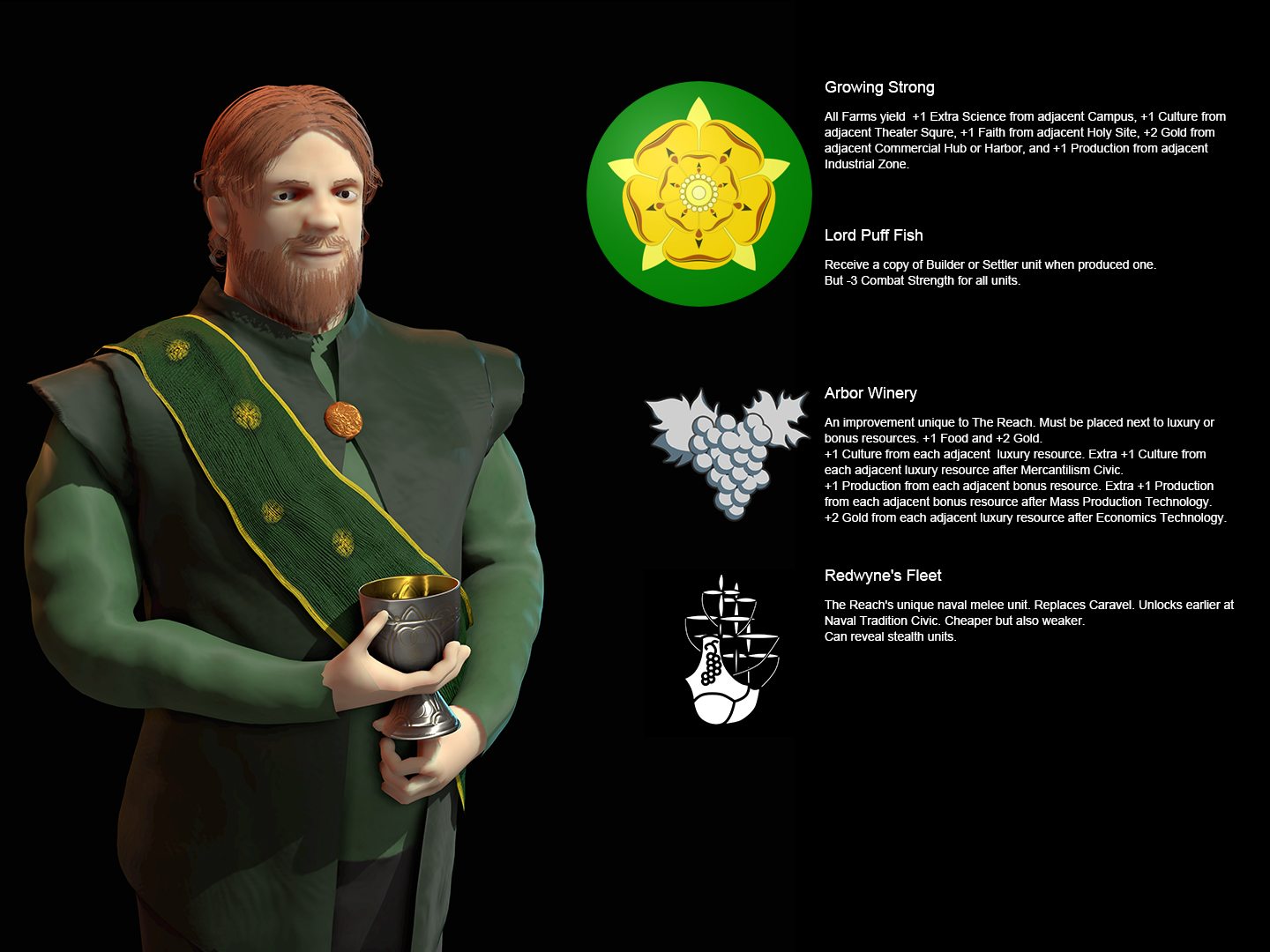 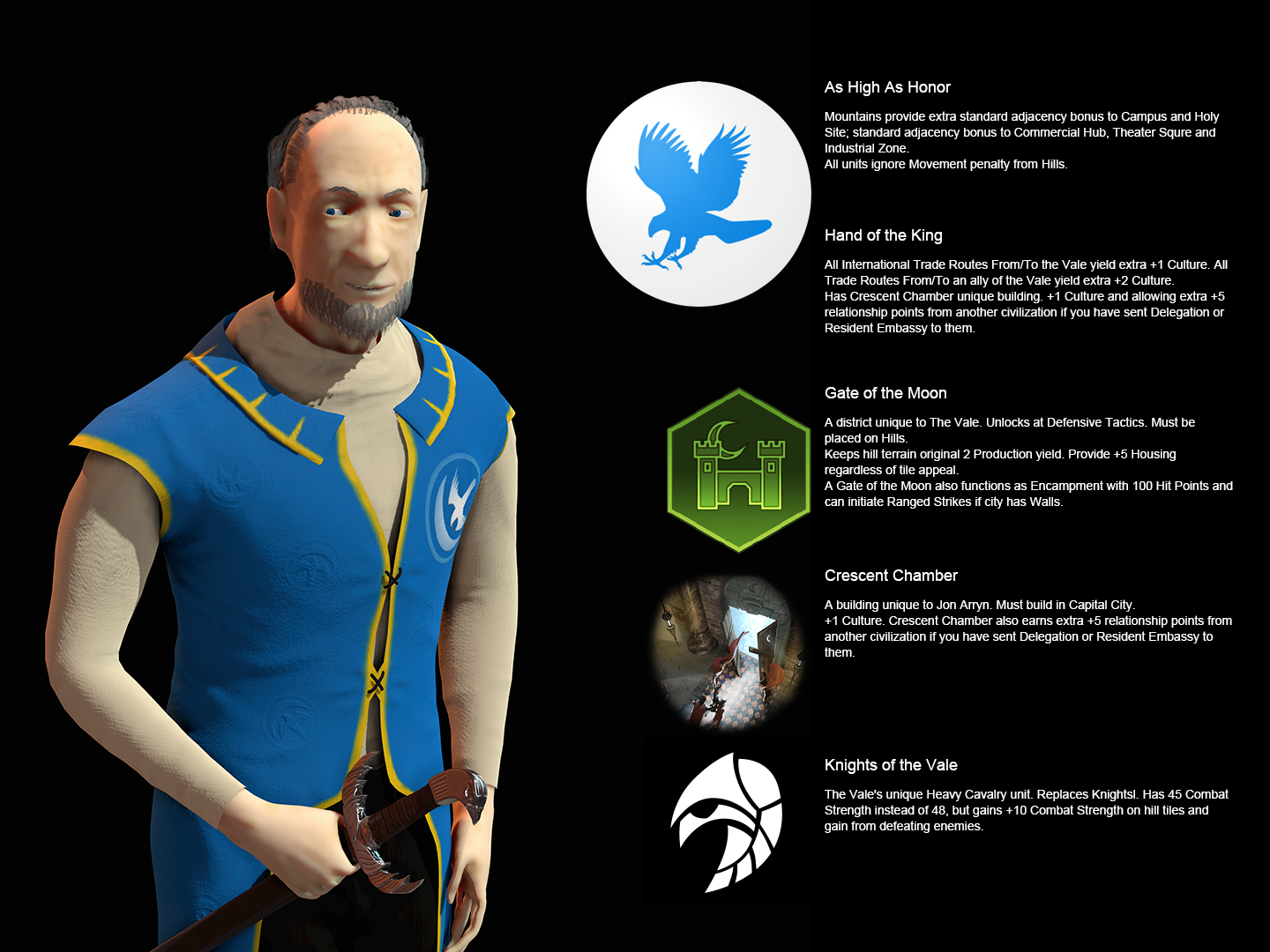 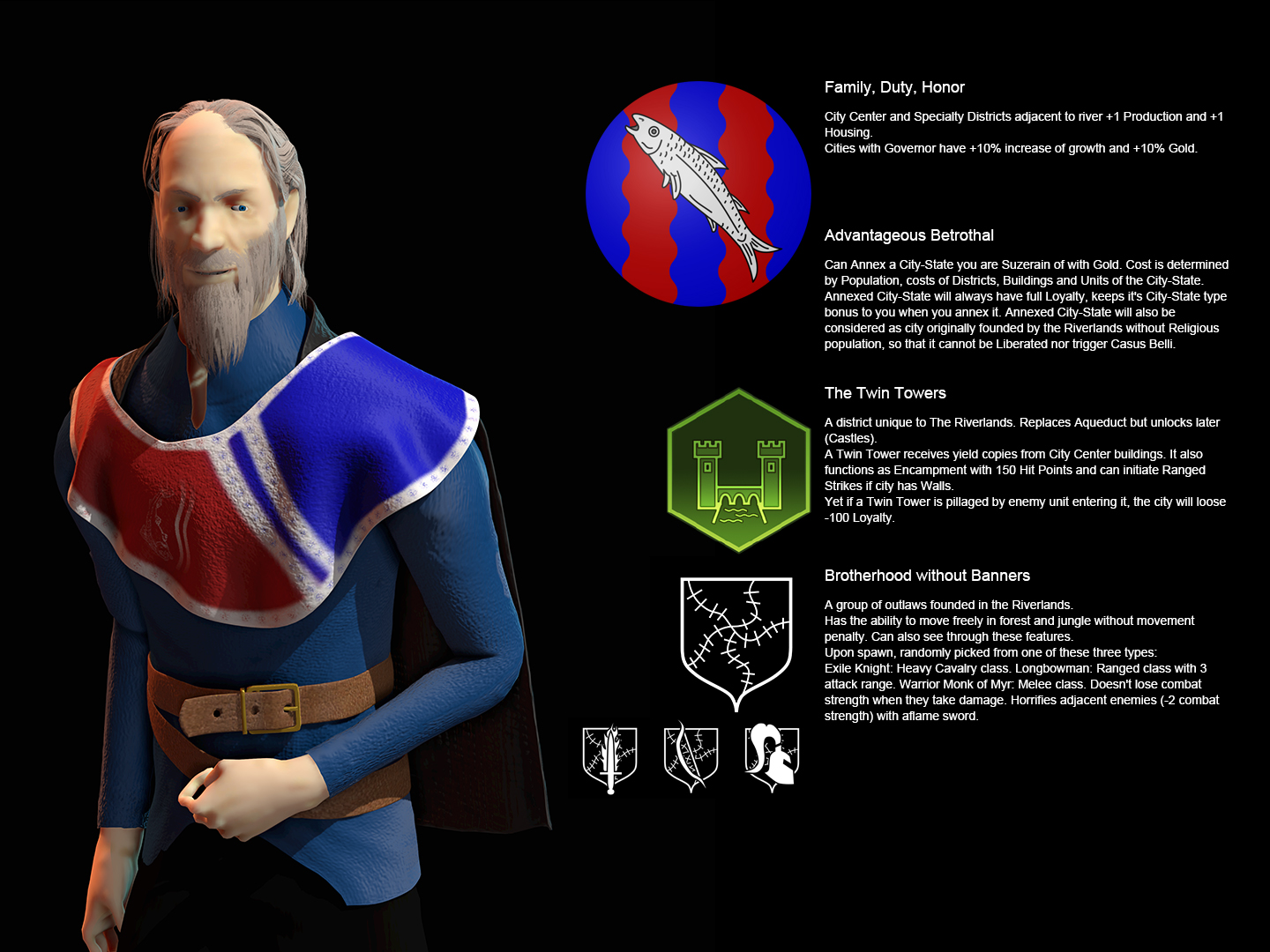 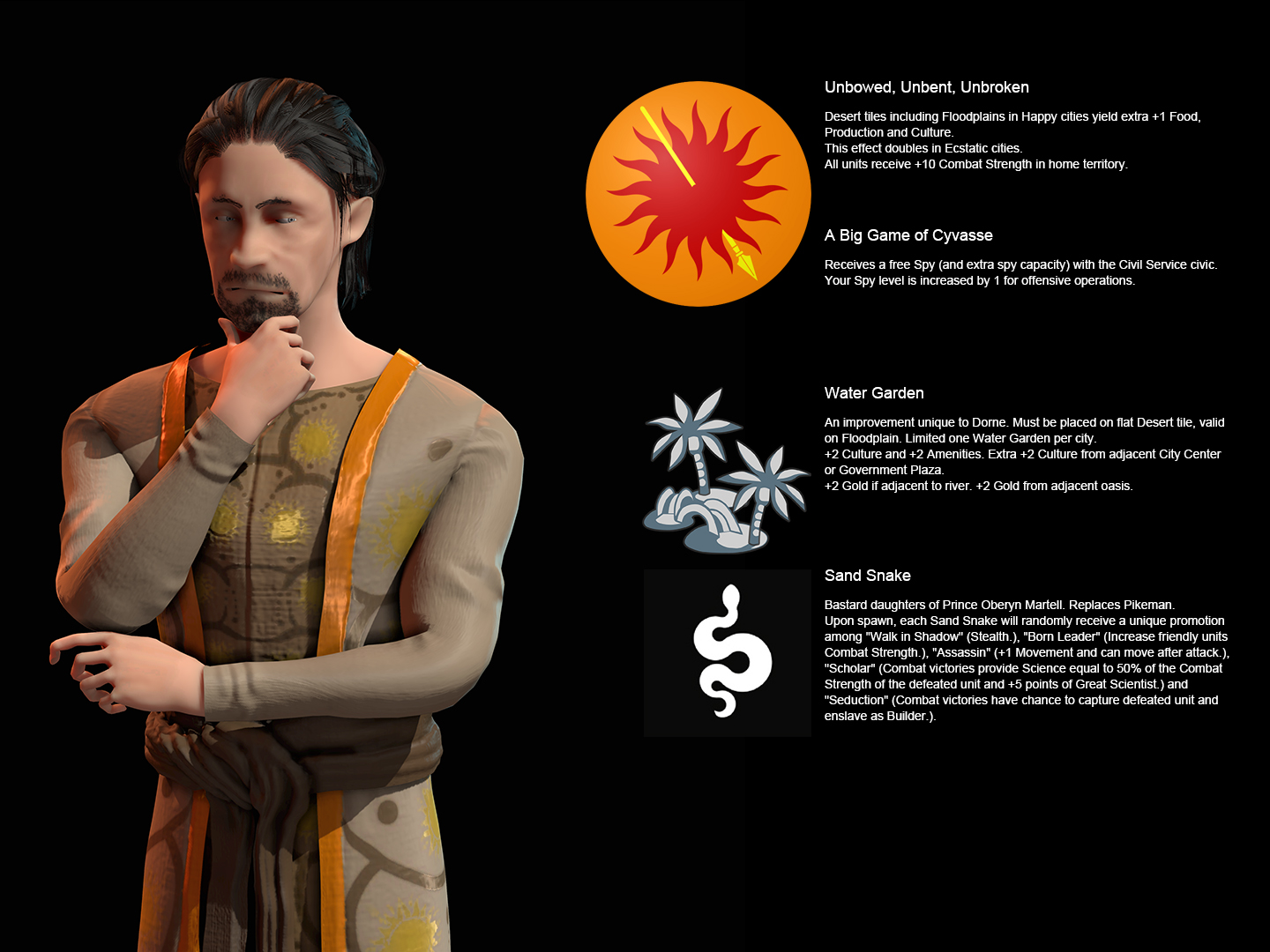 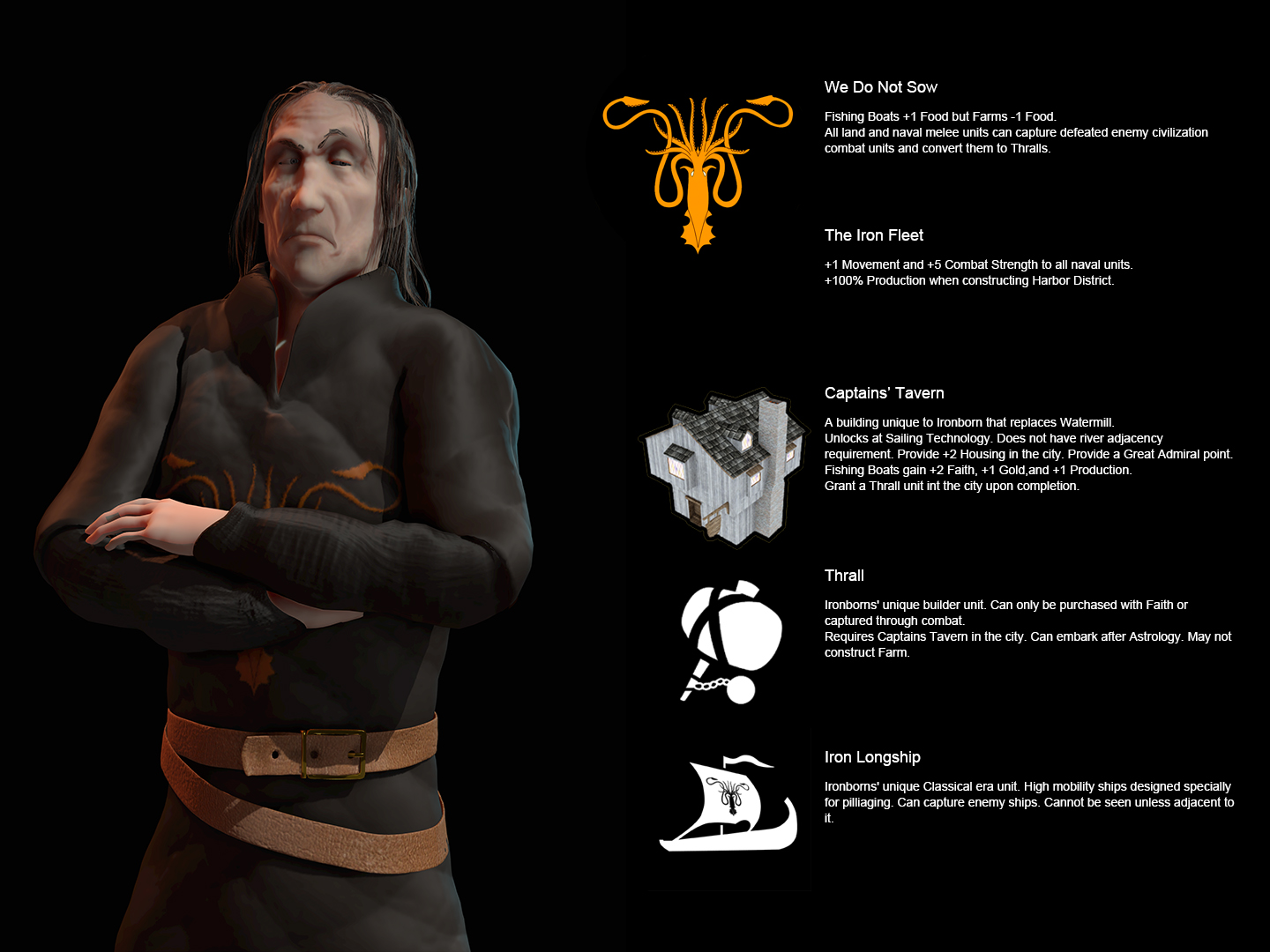 Sorry for the long absence and thank you for waiting so long. It's finally done!
It's been a huge amount of work on all 9 civs and leaders, especially the leader models. I also learnt a lot from making this pack, like using ZBrush to sculpt objects, baking texture maps from ZBrush as the base to work on, modeling hair cards, etc. I think this time I bring you guys a better quality pack, with more interesting designs, and more pleasant visuals.

This Mod is very different from the other "Ice and Fire" Mod on the workshop. Respect the other auther, and that's why I decide to use the theme era "Robert's Rebellion", which is something 16 years before "A Game of Thrones" happened. This is why all the heads of house appear younger, Rhaegar still alive, Hoster still conscious, Doran still standing, Robert isn't yet a fatty.
I also lean more towards the books rather than HBO TV series. I enjoy watching the shows, but there're a lot of screen plays I just can't agree with. So there's and won't be any "Jon Stark" or "Jon Targaryen" in my pack, no "Cersei Leads the Lannisters", nor Sansa being "Queen in the North". I love Sansa, and I believe she will play something even bigger, her stage isn't just the North.
Though, one possibility will be I might be interesting in making a Dothraki civilization, having Khal... who? I have no idea. May not be Drogo because he's too young at the time of "Robert's Rebellion". I may hear from your suggestions.

I hope this time I can catch the version up and make GS update in time.

IF YOU APPRECIATE THIS CONTENT, PLEASE SUPPORT ME HERE:
https://www.patreon.com/furion1986
Popular Discussions View All (3)

flowmingoz Mar 10 @ 8:07am
Could you add more range to the dragons or make them helicopters instead of planes? Having only 4 range made them fairly useless other than defense and definitely not worth the cost. Cities must be at least 3 spaces away from another city making unusable for siege (important to the Targs who can't build settlers). The dragon pit being a government plaza limits the ability to extend their range since you can only place 1. By the time I was able to use my dragons, every other empire was at 6 cities with man-at-arms who took 3 dragon hits to kill, and it had to be defensively. No civs would settle around my city which due to the cultural output. Dragons have unlimited range in the books/show. Maybe make them with lifespans like a hero but longer getting stronger each turn like Mulan? Other than an overcrowded map, I can't see the Targs being anything but an F tier civilization. That being said, I love the mod and appreciate your work!

Arg0knight Aug 9, 2021 @ 12:08pm
First major run through. Is there a ruleset I should work with or a companion mod to limit tech? I've now entered the "Renaissance Era" and have access to gunpowder - hope I don't wind up in a space race. I see that the dragon pit was also unlocked in this era, so I don't want to era cap and miss out on appropriate flavor.