Store Page
RimWorld>  Workshop > Chicken Plucker's Workshop
This item has been removed from the community because it violates Steam Community & Content Guidelines. It is only visible to you. If you believe your item has been removed by mistake, please contact Steam Support.
This item is incompatible with RimWorld. Please see the instructions page for reasons why this item might not work within RimWorld.
Current visibility: Hidden
This item will only be visible to you, admins, and anyone marked as a creator.
Current visibility: Friends-only
This item will only be visible in searches to you, your friends, and admins. 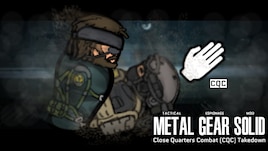 This item has been added to your Subscriptions. Some games will require you to relaunch them before the item will be downloaded.
In 3 collections by Chicken Plucker
Project: Red Horse 1.0

25 items
Description
Remember the basics of CQC. Non-lethal takedown of an opponent.

NOTE: Pawns need to be at least 8 melee to perform a CQC knock-out

Features:
- Reminds targeted pawns why their CQC is sloppy.
- Drops target's consciousness without causing much harm to their health

The CQC sound effect varies depending on the gender of who's being floored, special thanks to Jecrell for adding that as well!

The CQC Takedown can get clunky when targeting moving foes, you will have to be actively attempting to use the skill. Besides this AI issue, melee skill is also taken into consideration since there is a chance for the takedown to fail.

Disclaimer:
- Mod is highly unbalanced. This mod has no chance of being polished in terms of balancing because of coding limitations.
- Using the ability towards allies will cause zero reactions from them, another coding limitation issue that may be left unfixed.

If you're using this version mid-save, do NOT switch between the JecsTools version and this standalone version. THEY WILL CONFLICT AND CAUSE ISSUES WITH YOUR SAVE.
_________________________

Rimworld of Magic - Similar coding, gets funky and may cause major problems

Giddy Up! - May cause errors when knocking out ridden animals but you'll be fine

Credits to:
LimeTreeSnake - 1.1 update won't be possible without all his help, thanks so much Lime!
Jecrell - Without which this mod won't be possible since he did all the coding
Hideo Kojima - Metal Gear Solid

Goodbye lads, till next time

@NOT A COOL OSCAR - I appreciate it my friend but no need to call anyone any names. Remember to be nice