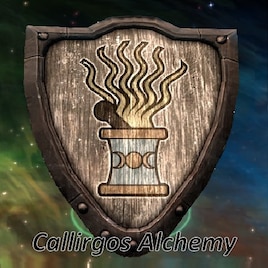 Callirgos
Offline
See all 4 collections (some may be hidden)
You need DLC to use this item.

This item has been added to your Subscriptions. Some games will require you to relaunch them before the item will be downloaded.
Description
This mod overhauls Alchemy.

SUPPORT me on Patreon
https://www.patreon.com/RPGGameMasters

-- INGREDIENTS --
All Ingredient effects redistributed to be more thematic and intuitive.
All Ingredient rarities, costs, magnitudes, and durations were reviewed and rebalanced.
Ingredients that could fictionally be food have the VendorItemFood keyword added to them.
Ingredients that could fictionally be raw food have the VendorItemFoodRaw keyword added to them.
Added Keyword VendorItemIngrediant to Ingredients that did not have it.
All Potion/Poison recipies have been updated.
New Potion/Poison recipies have been added to apothecary vendor lists.
Powdered Mammoth Tusk is now craftable after learning the recipe. Recipe can be purchased at vendors.

-- POISONOUS MONSTERS --
Spriggans (all), Chaurus (all), Spiders (all), Falmers armed with Swords, "Afflicted", and White Skeevers.
Poisonous monster attacks deal less damage per second for longer durations.
Poison Resistance reduces the duration, instead of magnitude, of poisonous monster attacks.
You can now prevent being poisoned by blocking a monster attack (claw/sword) with your shield.
If you have the Deflect Arrows Perk, you may now use your shield to block projectile poisons.
You must be facing the monster and have your shield raise to block poisonous attacks.
Monsters may still poison you by breaking through your shield with a power attack.
Spriggan poison spray (a swarm of bugs) cannot be blocked with a shield
Spriggan poison spray may instead be blocked with a magical shroud of flame, frost, or shock.

-- POISONOUS TRAPS --
Poison Damage and Trap Damage (if any) scale to the players level. (up to 81)
Dwemer Dart trap now Ravages Health and Stamina. Multiple darts may hit with compounding effects.
Darts raps may now poison multiple times, once from each dart that hits.
Poison Bloom Flowers are rebalanced to do less damage over a longer period of time.
Cure Poison now removes these poison effect.

MollieLane Jan 21, 2019 @ 10:57am
I've played this mod for about 5 hours and I'm really enjoying the fact that I'm having to experiment all over again with potion creation. And I'm really looking forward to delving deeper. Thanks for creating it.

Potato Priorities Jan 18, 2019 @ 8:04pm
As much as I love this mod, I often find that I've become overencumbered due to the weight increase. Granted I might just have a minor potion hoarding issue.