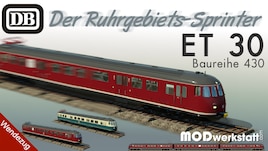 164 items
Description
The electric rail cars of class ET 30 (from 1968 class 430 of Deutsche Bundesbahn) have been designed for the express local service in the Ruhr Area and been delivered in 1956. They consisted of two motorized rail cars and one coach in the middle, which offered both 1st and 2nd class. The acceleration was pretty high to get speed up on the short stop distances. But due to high wear on the brakes and corrosion on the metal caused by the bad air at the Ruhr area at this time all engines went out of service before 1985.

darren67 Jan 14, 2019 @ 11:53am
A beautiful model and a very nice mini history lesson. Thanks for sharing...I know nothing about trucks/trains, but that is changing.