Store Page
Stellaris >  Workshop > Tovius's Workshop
This item has been removed from the community because it violates Steam Community & Content Guidelines. It is only visible to you. If you believe your item has been removed by mistake, please contact Steam Support.
This item is incompatible with Stellaris. Please see the instructions page for reasons why this item might not work within Stellaris.
Current visibility: Hidden
This item will only be visible to you, admins, and anyone marked as a creator.
Current visibility: Friends-only
This item will only be visible in searches to you, your friends, and admins. 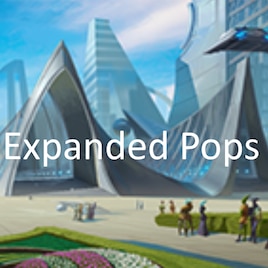 This item has been added to your Subscriptions. Some games will require you to relaunch them before the item will be downloaded.
In 1 collection by Tovius
Expanded Mod Collection

This mod adds a large number of new traits and civics, among other things. Please see the discussion post for a full list of features.

NOT COMPATIBLE WITH ANY AND ALL ETHICS MODS

Many New Civics and Origins, and changes to existing ones
- Equivalent Civics for corporations and gestalts
- Civics and Origins inspired by the Preset Empires
- Civics inspired by the (sadly now defunct) Hive Mind Expanded mod
- Two new megacorp authorities, based on the democratic and imperial authorities
- Preset Empires will use the new origins and civics where appropriate

Normal gestalts can give give non-gestalts residency, and build Autonomous Enclaves to support them.
- Too many free non-gestalts will cause increasing penalties, which can be mitigated with the Synchronicity finisher and certain civics
Hive Minds build districts and some buildings partially with food (unless Lithoid)
Gestalts can turn relic worlds into city worlds

Recommended Mods
Mods that compliment this mod, or which this mod can tie into

[www.patreon.com]
I have recently launched a patreon[www.patreon.com] page. I have a lot of future plans for my mods, but they will rely on your support to see fruition. I'm not planning on delaying releases for non-patreons or anything like that, but my patreons will get behind the scenes looks into upcoming content. If you enjoy my mods, I hope you consider donating a little.
Popular Discussions View All (5)

IlliaYanchuk 8 hours ago
What about adjusting Mechanist origin to also work with Machine Cult civic? Changing the prerequisites from "some level of materialist" to "materialist or has a machine cult civic" if it is possible. Or maybe just changing Machine Cult so that you start with a robot assembly plant and relevant tech.

Also, can you please check the Bug Reports section?) I have a issue i wrote there, but it wasn't answered (Although I'm not sure if the part about exploration there is even an issue, but the non-colonisation definitely is).

Butcher Pete Aug 14 @ 3:11pm
I'm having issues getting this mod and NSC to work together. Specifically, it seems that NSC does not like your changes to political parties (like ones created from the cult mechanicus civc) or changes to vanilla species traits. Is there a mod order anyone can recommend that might fix this?

Really the species traits reverting are not the biggest deal, but the spiritualist machine empire just creating a vanilla spiritualist political is the one that screws everything up. If the political faction for the machine cult was created at the beginning of the game (instead of a few years into the game like most political parties) that would probably fix the issue.

Spider Aug 14 @ 11:42am
Is there any way to get rid of the abolitionist movements?

Tovius  [author] Aug 11 @ 2:23pm
The Ruling Class mod completely overhauls the authorities and civics, and has a design philosophy that is very different from my own. Any comp patch would be extremely labor intensive to make.

kenken244 Aug 11 @ 4:26am
I'm wondering, if it wouldn't be too much trouble, would it be possible to make a compatibility patch with the new "ruling class" mod? I really like both mods and I hate that they don't work together

IlliaYanchuk Aug 9 @ 1:22pm
Corporate version of mining guilds only gives bonus minerals from miners and mining station output bonus. Should it perhaps be like the version for normal empires with new jobs? Is that intentional or an oversight?

In'ei Aug 9 @ 7:11am
It's minor thing, but I think there's missing icon for this job modifier "country_edict_fund_add" at least - as it looks like "M" on eyecracking purple background. Other than that - great job so far. Thanks for the update. :)

In'ei Aug 8 @ 9:14pm
Probably so. I was mostly playing corporates after installing your mod though (with some trade conversion adjustments to make it less OP - as it's worth it even playing without criminal heritage AND commercial pacts - my own trade value generation plus immunity to enemy criminal heritage branches). :)
< >