Store Page
Garry's Mod>  Workshop > Loadingue's Workshop
This item has been removed from the community because it violates Steam Community & Content Guidelines. It is only visible to you. If you believe your item has been removed by mistake, please contact Steam Support.
This item is incompatible with Garry's Mod. Please see the instructions page for reasons why this item might not work within Garry's Mod.
Current visibility: Hidden
This item will only be visible to you, admins, and anyone marked as a creator.
Current visibility: Friends-only
This item will only be visible in searches to you, your friends, and admins. 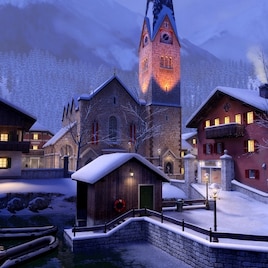 This item has been added to your Subscriptions. Some games will require you to relaunch them before the item will be downloaded.
In 1 collection by Loadingue
Loadingue's CSGO Map Ports (Stand-Alone)

18 items
Description
CSGO IS NOT REQUIRED! Anyone can play this map!

If you experience visual glitches the first time, try restarting the game!


This is a port of the CSGO Bomb map, de_austria, which was made by Radix for the Counter-Strike: Global Offensive workshop, and this port was made thanks to his releasing publicly the map files. So be sure to thank him by checking out his Workshop!

Austria is a map largely based on the real town of Hallstatt, Upper Austria, one of the most iconic little towns of central Europe, bordering lake Hallstätter See. While the layout of the map and of the town are quite different, the buildings are extremely similar if not identical, like the church which is very recognizable. The present map has many different streets and alleyways, and a few interiors including a wooden storage building and some apartments, and the docks are also accessible.

I've adapted the map to GMod, which means the following:

- Fine-tuned lighting and reflections for greater visuals
- Removed scripts and entities relating to CSGO
- Added AI nodes for bots
- Added openable/closable doors where possible
- Removed obstacles and walls intended for shooting balance or visibility
- Added access to a few previously inaccessible areas, mostly the docks, the restaurant terrace, the river, and some storage rooms.
- The TreeSway technique, or $treesway, has been vastly used far beyond what was originally in the map to make it feel more alive than ever! Now not only the trees, but also the bushes, the flags and the boats move around!


Also thanks to NandRand for making a particle converter that works wonders! Release thread on Knockout.[knockout.chat]

Also thanks to HAVOK for making his Source compilers[forum.facepunch.com] that push well beyond normal Hammer limits, this map and many others wouldn't have been possible without them!

Loadingue  [author] Aug 24, 2019 @ 3:57pm
He's still busy with life stuff but the converter itself seems finished. I'll give him a good kick in the ribs to get him to release it ASAP.

Arctic0ne Aug 24, 2019 @ 3:17pm
Have you heard any word on the particle converter? I tried to search for it but nothing comes up

Kira Yogumo Aug 13, 2019 @ 5:21pm
Oh I see what a shame, I really enjoy the beautiful detail of the town you made. But it's still excellent detail, I'm sorry to hear it won't be able to have more interior detail. Thank you for the post either way.

Loadingue  [author] Aug 13, 2019 @ 5:17pm
Well buildings in the middle of the map can be entered, and a little here and there. But even if I had taken the time to make more accessible, I would have been limited by the upload size to Steam anyway.

Kira Yogumo Aug 13, 2019 @ 4:44pm
Well, I love the map design over all. Beautiful exterior and general design. I would have to say though that not being able to enter any of the buildings ruins the enjoyment for me, also I feel it would also have been better if the size of the access of the town would have been vaster. Otherwise it's a beautiful map but missing features to make it more enjoyable for me. Good work with what you have though, lovely map.