Store Page
Arma 3>  Workshop > dead_kennedy's Workshop
This item has been removed from the community because it violates Steam Community & Content Guidelines. It is only visible to you. If you believe your item has been removed by mistake, please contact Steam Support.
This item is incompatible with Arma 3. Please see the instructions page for reasons why this item might not work within Arma 3.
Current visibility: Hidden
This item will only be visible to you, admins, and anyone marked as a creator.
Current visibility: Friends-only
This item will only be visible in searches to you, your friends, and admins. 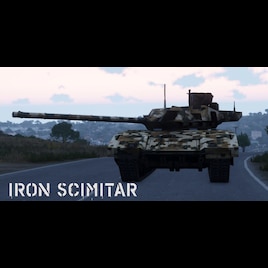 dead_kennedy
Offline
See all 19 collections created by dead_kennedy and other people (some may be hidden)
You need DLC to use this item.

This item has been added to your Subscriptions. Some games will require you to relaunch them before the item will be downloaded.
In 1 collection by dead_kennedy
Well-made tactical single

11 items
Description
"Iron Scimitar", SP
Take the role of a CSAT tank company leader (amir) in a large combined operation against a NATO forces on Malden. Command the whole company of 9 vehicles with HighCommand system, use the artillery support, mines and recon units to reach the victory.

Be advised, this is a SINGLE player mission, the Steam probably marks it as a MP one because of use of the teamswitch.

If you like large-scaled single missions and wanna to see more, then take a second to rate "Scimitar" and add it to your favorites!

- ADDED: logistic setction now has the ammo truck.
- ADDED: there will be a point of rearm / repair near the objective "Mansur" when the player capture "Mansur" and friendly mechinfantry arrives.
- ADDED: a small hint in the brieffing about the HighCommand interface.

the_prophet1987 Jun 20, 2020 @ 2:17am
I have the arty problem too.And if it's possible can you make the repair truck drivable?To be able to switch to this unit.Because he never get's close enough to vehicles to repair them.Because of stupid AI collision detection.Great mission ,too bad i can't play it because of this!

The arty support is fully based on Bohemia's modules and I don't even know what can go wrong, but sometimes it evetually does.

pansalva Apr 16, 2019 @ 4:01am
I've encountered a problem: after calling the arty strike, none of projectiles hit the target, there isn't even "Splash" radio message from arty unit.
It's not blocking for the mission, but significantly impacts on the losses of the allied units.
< >