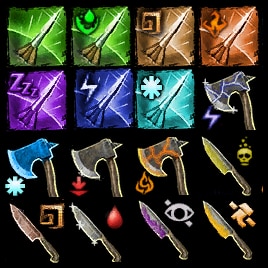 J0k3_R
Offline
See all 555 collections (some may be hidden)

This item has been added to your Subscriptions. Some games will require you to relaunch them before the item will be downloaded.
Description
This is currently just a port of the mod I did for DOS 2 Classic. I will be making soe changes in the future but for now this I'll release it as is

What is this?
Throwing Weapons Armory is my latest mod, which adds new throwing weapons to the game! These weapons work like grenades, meaning you can't equip them like a weapon but you add them to your skill bar and cast them like a spell. The weapons are all classed by the game as "Grenades", meaning all weapons should work perfectly with all grenades talents! I Added this because I felt these were missing in the base game and to hopefully add more variety to builds.

Types of Throwing Weapons
At present, this mod adds 3 types of throwing weapons. These are:

Darts: These are low damage, Finesse Scaling throwing weapons that can pierce through enemies and set weaker versions of existing statuses through armor (i.e.: there is 100% chance to apply the status regardless of armor). Using a dart weapon will allow you to throw 2 darts at once. Darts can be used in stealth and have the longest range of all throwing weapons.

Throwing Knives: Throwing Knives are Finesse Scaling throwing weapons that mainly do Armor damage (with the exception of two). Throwing knives will not break stealth, can backstab and get a nice 150% damage bonus out of stealth. They do not set any elemental statuses, but can be coated with a variety of poisons that set some unique statuses the other two weapons can't, such as blind, crippled and diseased.

Throwing Axes: Throwing Axes are Strength Scaling Throwing weapons designed for burst damage. They have the shortest range of all the throwing weapons, but deal more damage the further they are thrown. Comes in physical and elemental variants.

Obtaining the Weapons
To obtain these new weapons I have added 2 new vendors to the game that sell them to you. The first is Elara, The Dextrous One who can be found at the Arena of the One in Fort Joy. She will sell you a few basic throwing weapons that you can access right from the start of the game!

Once you get to the Lady Vengeance, you will meet Edwin Thorne Your trusty throwing weapons vendor for the rest of the game. He will sell every throwing weapon this mod has to offer.

In a later patch I will start to add crafting recipes for these too.

Feedback
As always, feedback is much appreciated! Let me know in the comments what you think. If you have any ideas for throwing weapons or balancing, let me know!

Col. Fagnificent Dec 8, 2019 @ 4:35pm
can I make a request?
- Similar to the Medicinal Dart that restores vitality, make one that restores or gives Physical Armor and another dart that does the same for Magic Armor. Pretty please and thank you ;3

MajesticNoodle Nov 18, 2019 @ 4:29pm
At least with Divine War all of these seem fairly balanced, only notable exception is the 2 turn knockdown axe is insanely strong. Even in Vanilla a no CD 2 turn knockdown is kinda crazy.

Krisys Aug 19, 2019 @ 2:40pm
Is it possible to get those items to be added to the game's loot tables instead of having them sold at one place ? It would be really cool :D

lost_soul Apr 27, 2019 @ 2:01am
So some daggers need a dagger to be equipped.. and some daggers do not? Is that planned for backstabbing?

Haddon Mar 9, 2019 @ 1:20pm
These throwing weapons are awesome, though they are not well-balanced. The physicals scale too well, at least the knives and axes. I would say make them deal piercing damage, so they don't scale with Warfare, or turn down the stat scaling a bit. I am currently using an ambidextrous Beast to Backlash an enemy, then throw 3 knives into their back, next turn use a teleport skill and 3 more knives. It is costly, and doesn't work until you get to Act 2 (the first vendor doesn't sell enough), but god Beast is doing as much damage as my Summoner/Necro and his summon combined.
< >