Store Page
Tabletop Simulator >  Workshop > Warren's Workshop
This item has been removed from the community because it violates Steam Community & Content Guidelines. It is only visible to you. If you believe your item has been removed by mistake, please contact Steam Support.
This item is incompatible with Tabletop Simulator. Please see the instructions page for reasons why this item might not work within Tabletop Simulator.
Current visibility: Hidden
This item will only be visible to you, admins, and anyone marked as a creator.
Current visibility: Friends-only
This item will only be visible in searches to you, your friends, and admins. 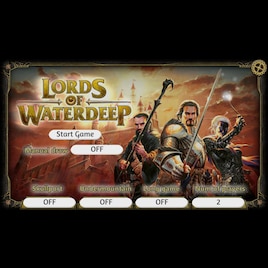 Warren
Offline
See all 129 collections (some may be hidden)

This item has been added to your Subscriptions. Some games will require you to relaunch them before the item will be downloaded.
Description
Game description from the publisher:

Waterdeep, the City of Splendors – the most resplendent jewel in the Forgotten Realms, and a den of political intrigue and shady back-alley dealings. In this game, the players are powerful lords vying for control of this great city. Its treasures and resources are ripe for the taking, and that which cannot be gained through trickery and negotiation must be taken by force!

In Lords of Waterdeep, a strategy board game for 2-5 players, you take on the role of one of the masked Lords of Waterdeep, secret rulers of the city. Through your agents, you recruit adventurers to go on quests on your behalf, earning rewards and increasing your influence over the city. Expand the city by purchasing new buildings that open up new actions on the board, and hinder – or help – the other lords by playing Intrigue cards to enact your carefully laid plans.

During the course of play, you may gain points or resources through completing quests, constructing buildings, playing intrigue cards or having other players utilize the buildings you have constructed. At the end of 8 rounds of play, the player who has accrued the most points wins the game.

This mod is a scripted version of this one: https://steamcommunity.com/sharedfiles/filedetails/?id=559289441
Changes were made in the table used, as well as the layout of the pieces in it

As always, if you find the game enjoyable support the tabletop designers by buying.

Multiple quality of life scripts
-Draw new quest
-Reset quest
-Draw new buildings
-Get all agents back
-Start round
-Get a new agent in round 5
-Counter for the meeps you have (Priests, Warriors, Rogues, Mages)
-Counter for the gold you have

Features:
-An appointed space to put your Lord card

WombatCombat Jul 24 @ 1:48pm
Seem to get some errors while loading

Warren  [author] Apr 28, 2021 @ 10:26am
Next to the building deck, to the left of it, near the VP piles, there is a round button for each round. "Round 1", "Round 2", etc. You press each one at the begining of the corresponding round. On round 5 you also have to press the + button where the extra worker of each color would be place, below those round buttons.

Karaoke Apr 27, 2021 @ 6:05pm
Is there a turn tracker that I'm missing? My group can't figure out how to keep track of turns or get access to the fifth turn bonus worker.

Day-Knight Apr 2, 2021 @ 6:46pm
Can't seem to figure out how to use the lord card section correctly, whenever I a lord is placed there it is visible to everyone.

XShrike Mar 27, 2021 @ 7:36pm
What is the difference between the New Quest and Rest Quest buttons? Both seem to just draw four quests and place them on the stops, regardless if there are already quests there.

Warren  [author] Mar 23, 2021 @ 1:29pm
You can place your lords there and they should only be visible for the person of that given color.

DON Mar 23, 2021 @ 7:28am
btw, what is the use for the color boxes under "Lords" on the bottom of the board (seen on 4th image)? tried playing with it but nothing happens so not sure if im doing it right.

teh_dk Nov 26, 2020 @ 7:23pm
Played this tonight. Took a little while to figure out how to start correctly and learned some things along the way, but it was super fun! Thank you.