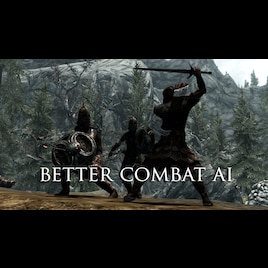 joop
Offline
See all 4725 collections (some may be hidden)

This item has been added to your Subscriptions. Some games will require you to relaunch them before the item will be downloaded.
Description
Better Combat A.I. (Artificial Intelligence)
Enhances the combat AI for NPCs within the game.

What this mod does:

1. Smarter NPC combat behavior. NPCs are now more likely to:
- Use power attacks more effectively (i.e. power attack when their enemy is blocking/staggered)
- Attack more aggressively when in groups (including mages/archers)
- Try to bash and stagger
- Attack when their enemy is not blocking
- Attempt to block
- Disengage from melee combat (if NPC is an archer/mage) when they gain distance from their enemy
- Archers are more prone to draw melee weapons (if available) if they believe they're getting charged. For balance, archers now have a higher preferred distance from their enemy.
- Attempt to circle their enemy if they can't find an angle for attack
- Archers/mages have increased desire to navigate away from enemies to avoid melee combat
- NPCs will now search a wider radius when alerted
- NPCs will travel further distances/have higher preference for picking up better weapons in combat

2. Expand differences in combat styles to make combat more immersive. For example:
- NPCs using the 'beserker' combat style will spend the majority of their time attacking, while NPCs using the 'tank' combat style will spend most of their time blocking or defending.
- A farmer will be much less effective in combat than a bandit ringleader
- Draugr charge straight towards enemies and spend very little time blocking
- Wolves will circle around an enemy and only attack for short periods before circling again. In larger packs, wolves will rotate in for the attack while the rest circle their enemy
- Dragons now highly prefer hovering/strafing attacks over perched/ground attacks. To balance this for melee players, when dragons do decide to land, they stay landed for an increased amount of time. Also, dragons are now more prone to perform special ground moves (for example, tail bashing an enemy attacking from behind.)


There is an optional module that lower dragons' preference for attacking while in the air, increasing the likelihood of dragons landing/perching to attack. The optional module can be found here - http://steamcommunity.com/sharedfiles/filedetails/?id=430739032

NPCs from mods should take advantage of the changes made from this mod, unless they're given a unique combat style (which is rare.)

This mod does not use ANY scripts; this mod only modifies default combat styles and combat mults found within the creation kit to enhance realism/immersion. For those concerned, this mod has been made as clean as possible; all references besides 'combat style' and 'GMST' have been removed from the mod via TES5edit.

The following is not Skyrim/mod related, so feel free to stop reading!

Just a bit of self-promotion to any of you who play CS:GO - If you want, I would greatly appreciate it if you could check out my weapon submissions for the CS:GO workshop! Any feedback is appreciated.
Popular Discussions View All (4)

Questions before installing the mod...
MisterRoboot

joop  [author] Oct 12 @ 1:37pm
Hi Pookie, it could be this mod, but a lot of dragon behavior is dictated by the worldspace you're in. You can also try this add-on mod that forces dragons to land more often - https://steamcommunity.com/sharedfiles/filedetails/?id=430739032

Pookie Oct 12 @ 3:39am
i got no problems with human npc in combat they are absolute beast and make you nervious but the dragon got problems man

Pookie Oct 12 @ 3:38am
yo seriously a quick serious question is this normal or this mod causes the dragon to fly away very far from your combat location, i am playing in master difficulty.

seriously the dragon flies away from you like 30 meters + away and eventually returns back to you.

Em1lic0 Oct 9 @ 2:20pm
No, just legendary difficulty, I dont know if thats the problem but since I installed it, every enemy feels like has tons of damage and massive health, I have many hours of this game, and I know the mecanics. But the NPCs suddenly scaled up in damage and health by alot and its strange because it never happened to me before, might be because my character isn't as OP as intended for the mod, but might be both, my character isnt OP and the NPCs got stronger as well.

joop  [author] Oct 8 @ 4:58pm
Hi Em1lic0! This mod shouldn't touch any damage parameters. NPCs may do more damage because they're attacking more often, however. Do you have any other mods installed?

Em1lic0 Oct 8 @ 12:07am
This mode doesnt make the AI better in combat, they just do tons of absurd damage, lightning mages instakill you and archers are stupidly strong, playing as a hand to hand character is almost impossible, if you have this mod, it is MUST to glitch the game and do the Restoration - Enchanting potion glitch to balance the game.

Pookie Oct 5 @ 12:15am
I cant believe i cant kill the alikr leader if this mod is activated xD so very hard

Odin's Valkyrie Jul 11, 2019 @ 5:46am
i fixed the problem kinda i had only this mod and installed after this combat realism then i worked better then before

joop  [author] Jul 10, 2019 @ 2:31pm
I have no way of confirming this, but from my experience this sounds like a Vanilla glitch. When too many AI processes are running at once, NPCs tend to stand around/not fight back/not fight until attacked first. This mod doesn't address these issues - it only makes changes if the AI is actually behaving combat processes to begin with.
< >