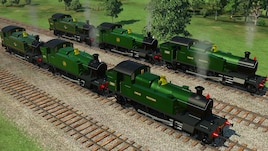 JK
Offline
See all 100 collections (some may be hidden)

This item has been added to your Subscriptions. Some games will require you to relaunch them before the item will be downloaded.
Description
6 versions. Available 1905-1966.


The GWR 5100 class were 2-6-2 tank engines, catergorised as 'Large Prairies' (from the American name for the wheel arrangement). Designed for passengers and freight, on the branch lines or suburban passenger services. 40 were built between 1903 and 1906 in this class. In total about 290 Large Prairies of various classes would be built.
The GWR 5101 class were Collett's version , with various incremental improvements. 140 were built built between 1929–1949, remaining in service til 1965, with 10 being preserved.
Under BR a final 20 were built in 1948-9. They were withdrawn from 1956, with the last 29 leaving service in 1965, being replaced by diesels on the suburban passengers routes.

JK  [author] Jan 7, 2019 @ 10:55am
@Some random dude - Yeah I know what you mean about the text & logos when coloured. Ideally they would not be shown for the recoloured version, but that's not possible. Currently there's one small texture map for recolouring all the versions. Whereas to them properly detailed would need 6 large images instead. So it doesn't really justifiy it for what I view as just a bonus feature.

Archimiedes Dec 31, 2018 @ 11:16am
Great job on the models, but could you please do something about the GWR text changing color with the engine? No offence but the text become a lighter shade of color than the engine just doesnt look right. But still, excelent job on modeling the engine