Store Page
RimWorld>  Workshop > SickBoyWi's Workshop
This item has been removed from the community because it violates Steam Community & Content Guidelines. It is only visible to you. If you believe your item has been removed by mistake, please contact Steam Support.
This item is incompatible with RimWorld. Please see the instructions page for reasons why this item might not work within RimWorld.
Current visibility: Hidden
This item will only be visible to you, admins, and anyone marked as a creator.
Current visibility: Friends-only
This item will only be visible in searches to you, your friends, and admins. 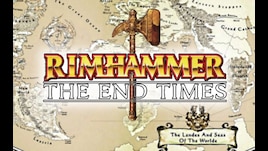 Arobain
Offline
See all 211 collections (some may be hidden)

This item has been added to your Subscriptions. Some games will require you to relaunch them before the item will be downloaded.
Description
THE 1.1 VERSION CAN BE FOUND HERE: https://steamcommunity.com/sharedfiles/filedetails/?id=2007275942

This mod is intended to add Warhammer into your RimWorld experience. This mod, and the extensions that come after it, will provide a high medieval fantasy version of RimWorld set in the old Warhammer universe.

This is the base mod for the Rimhammer mod series, and sets up the groundwork for the other mod extensions that will arrive in the future such as the races.

Things that this mod currently does:

Removes everything in the game after the medieval time period. No electricity. No guns (well, some races will have guns later on (i.e. Dwarfs and Empire). No bionics. This includes removing things that would therefore have no game effect, such as solar flares, and tweaking the description on things that are still flavorful, such as toxic fallout. Since the game was not originally designed to stay at a medieval technological time, the mod also adds important things to fill the gaps that vanilla Rimworld left:

-Adds coal as a mineable resource that can be used to fuel stoves, forges, and such.
-Adds a furnace stove that can be used to cook at, as well as keep a room warm.
-Adds a floor brazier that can be used for light, and heat.
-Adds wall sconces for lights, to keep the rooms looking better.s
-Adds two methods of food preservation: pickling (for meat and veggies) and curing (for meats, significantly extends shelf life of meats, but requires some effort).
-Replaces the modern electric smithy with a wood/coal fueled smithy
-Adds chaos monsters as a new hidden faction that will attack your colony. Current list: Chaos Spawn, Razorgor, Jabberslythe, and Tuskgor.

-Adds a new victory quest: Great Chaos Portal Journey. Journey to the great chaos portal, and destory it to save the old world (and win the game)! Finally a medieval game win condition!
-Adds new quests: Nearby Jabberslythe Lair that needs to be cleared out, nearby Small Chaos Portal to destroy.

-Adds Chaos Wastes biome. Makes all non ice sheet tiles around the north and south poles into Chaos Wastes biome rather than what they'd be otherwise. There are settings built in to control how far south the chaos wastes extend.

Animals exposed to Chaos Corruption may go maddened, but will not turn into a Chaos Spawn.

Implement the various races present in the Warhammer Fantasy world.

I will try to add all the races from Warhammer as playable races, with loads of extras and themed items/quests: Lizardmen, Orcs and Goblins, High Elves, Dark Elves, Daemons of Chaos, Chaos Mortals, Skaven, The Empire, Bretonnia, and so on. The human factions may be combined into one release. We may even add a few of the lost races like the Fimir if we get far enough. We will be adding magic, beast riding, and etc as well. Every race will have their own special attributes/effects that reflect how they are in the Warhammer universe.

Discuss this at Ludeon: https://ludeon.com/forums/index.php?topic=47626.0

Buy me a coffee: https://ko-fi.com/sickboywi

If you'd like to speed up the process of release, please consider supporting me on Patreon. The more support I get, the more motivated I will be to create more races/factions. https://www.patreon.com/SickBoyWI

This mod took many, many hours of work. Special thanks to the Lord of the Rims series for inspiration, and for some great examples to get me going. Also, special thanks to the people at the Ludeon forums who answered my programming/config questions. This series will likely not be released fast. I'm one person, and the amount of work involved is significant. This first mod took easily over forty hours of work.

Super special thanks to Discord users "Dino's Bar and Grill" for the forge/anvil texture, and Rebelrot for the super sweet chaos spawn and razorgor images!!

Generating the world is not possible
KS
< >
260 Comments

SickBoyWi  [author] Jan 2 @ 4:45am
@Butt Stallion - You could also get the Any One Can Dwarf mod that I made, which will open up all dawi stuff to any pawn.

SickBoyWi  [author] Aug 23, 2020 @ 6:59pm
@Butt Stalion - The dwarven research bench can be made from any material. You must have only had granite available in a stockpile. Perhaps you deconstructed some granite walls? Once you have a dwarf in your colony, you can build the dwarf research bench, and any researcher should be able to use it.

Butt Stalion Aug 20, 2020 @ 10:31pm
This is literally one of the least user friendly mods I've ever used on any game. Only dwarves can use the dwarven research bench... ok restart playthrough. Starts new save as dwarfs but comes to find out that you can ONLY build it with granite. And I'm on a map with only limestone, marble and sandstone... yeah bud great design. 4/10 for the effort

SickBoyWi  [author] Jun 24, 2020 @ 6:04pm
@SuperTit91 - That's the way the scenario is set up. You should be able to create your own scenario though, and add whatever kind of pawns you want to it. I just released the update. It's for 1.1 though, this is the 1.0 version of the mod. 1.1 version was uploaded as a new mod in order to insulate people with ongoing games from breaking saves.

SuperTit91 Jun 20, 2020 @ 6:07am
Hey, love the mod but i cant start with dwarf slayers unless i started on naked brutality? cant even select dwarf slayer haircuts even with prepare carefully. Is this intentional? Also was watching your youtube play throughs, any idea on when the next update is gonna be?

SickBoyWi  [author] May 30, 2020 @ 6:09am
@GGEELL - You can, but this affects world gen, and adds factions. If you don't have it at the beginning you'll only be getting the research items, and additional buildings that it adds.

SickBoyWi  [author] Mar 26, 2020 @ 3:11am
@chase12324 - Make sure you're using the 1.1 version, not this one, if you're using the latest version of the game. A lot of stuff has started to work funny in 1.0, since various mods have updated, and may or may not have done so in way that makes backward compatibility fully possible.
< >