Store Page
Stellaris>  Workshop > spacht's Workshop
This item has been removed from the community because it violates Steam Community & Content Guidelines. It is only visible to you. If you believe your item has been removed by mistake, please contact Steam Support.
This item is incompatible with Stellaris. Please see the instructions page for reasons why this item might not work within Stellaris.
Current visibility: Hidden
This item will only be visible to you, admins, and anyone marked as a creator.
Current visibility: Friends-only
This item will only be visible in searches to you, your friends, and admins. 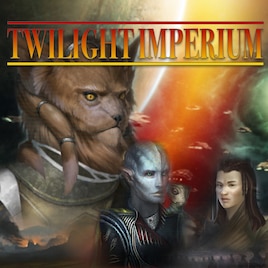 spacht
Offline
See all 42 collections (some may be hidden)

This item has been added to your Subscriptions. Some games will require you to relaunch them before the item will be downloaded.
Description
This mod consists of 17 prescripted empires based upon the Twilight Imperium game with some minor additions for flavor.

As information sources i used the 3rd and 4th editions of Twilight Imperium. When the lore was unclear i went for diversity, spreading ethics, civics and habitability types amongst the empires.

The mod is playable without DLC, but most of the empires require at least one DLC. A detailed requirements list is posted in Discussions. There are fallback versions included so even without DLC you will always have all 17 TI empires.

Features:
- 17 prescripted empires based on Twilight Imperium. Choose one for yourself and set the AI empires slider to 16 for a pure TI experience
- flavorful additions from the TI universe like unique civics, traits, origins, events and anomalies
- claim the Imperial Throne on Mecatol Rex and draw the ire of the other empires
- discover planets and surviving colonies from the Age of Dusk

That said this is designed to be a lightweight mod that you can mix-and-match with your favorite gameplay and AI mods.

There is another mod on the workshop with TI prescripted empires. Interestingly, we both came to nearly the same conclusions regarding most of the empires. You can find it here:
https://steamcommunity.com/sharedfiles/filedetails/?id=1498829361
Popular Discussions View All (2)

spacht  [author] Nov 30 @ 12:48pm
I'm curious myself. I hope to get into a modding mood during the christmas holidays.

Fumeknight79 Nov 30 @ 12:24pm
I'm really curious to see what you'll do for the ones like the mahact, titans, and the nomad. I can see mahact being that angel-like lithoid, though I'm not too sure how I feel about lithoid mahact. Titans would probably be the default lithoid or the aquatic robot.

spacht  [author] Nov 25 @ 1:20pm
There should be a compatibility patch out this weekend.

spacht  [author] Oct 18 @ 2:18pm
Fixed! Thanks for that suggestion, MonkeysInSpace!

spacht  [author] Aug 24 @ 11:41am
Sorry, no progress yet. I'm still waiting to get back into the modding mood. Maybe the upcoming Lem update will help with that.

Dynas Aug 23 @ 4:40pm
Any update on getting the Prophecy of Kings Factions added?

spacht  [author] Jul 26 @ 11:41am
Some of the fallback versions were using invalid ship and city sets. Should be fixed now.

HipsTheNerd Jul 25 @ 4:10pm
I think I'm having the same problem. I'm only seeing 12 empires when I go to start a new game and I have no other mods loaded. I have like half of the DLC.
< >