Store Page
Transport Fever>  Workshop > Jones's Workshop
This item has been removed from the community because it violates Steam Community & Content Guidelines. It is only visible to you. If you believe your item has been removed by mistake, please contact Steam Support.
This item is incompatible with Transport Fever. Please see the instructions page for reasons why this item might not work within Transport Fever.
Current visibility: Hidden
This item will only be visible to you, admins, and anyone marked as a creator.
Current visibility: Friends-only
This item will only be visible in searches to you, your friends, and admins. 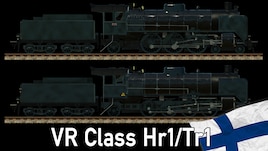 This item has been added to your Subscriptions. Some games will require you to relaunch them before the item will be downloaded.
In 1 collection by Jones
Finnish vehicles

17 items
Description
Hr1 class (original classification P1) was the largest passenger express steam locomotive built in Finland. In the thirties there was a need for faster and heavier express trains in Finland. The nickname of the locomotive was Ukko-Pekka meaning approximately (respected) Grandpa Pekka, after the President of Finland Pehr Evind Svinhufvud. The Hr1s were the most important express steam locomotives and could justifiably be called the flagships of VR until 1963, when diesel locomotives started to replace steam. Their use ended officially in 1971, but two roller bearing Hr1s were returned for a short use in spring 1974.

Sixtyseven Tr1 locomotives were built between 1940–57 by Tampella, Lokomo and Arnold Jung Lokomotivfabrik GmbH, Jungenthal of Germany. Tr1 is a product of the same era as the express train locomotive Hr1, and they share a similar appearance.

Price and running costs are defined by the game automatically.
Source for custom sounds: https://freesound.org/people/YleArkisto
< >
10 Comments

Jones  [author] Dec 26, 2018 @ 12:35am
@sirrliv, thanks! Didn't notice the third wheel, I guess I was concentrating to rod animations work properly. Update is sent and wheels are now spinning :)

sirrliv Dec 25, 2018 @ 5:50pm
I've noticed that the third driving wheel set on the Tr1 does not turn at all. Also, while both locos have chuff sounds, they do not have whistles.

That said, I did find their performance to be quite encouraging, being able to reach and maintain their top speeds with useful loads within a decent time.

KubaKorea Dec 23, 2018 @ 8:52am
Beautiful Locomotive! Now that you have "Ukko-Pekka" out, are you thinking of doing a model of "Pikko-Jumbo" too? Merry Christmas! :D

sirrliv Dec 22, 2018 @ 6:38pm
Just putting out a fun thought, but this could make for a good stand-in addition as part of a Japanese modpack; until actual models are created, the Hr1 makes a good stunt double for the JGR C51 Class (Japan's first domestically designed & built express passenger steam engines), and the Tr1 performs the same for the D51 Class (Japan's second most produced freight locomotive). The only things off for this purpose are the starting dates, but the ending dates actually also work as Japan ended steam use in 1976.