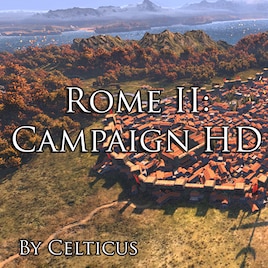 Celticus
Offline
See all 660 collections (some may be hidden)

This item has been added to your Subscriptions. Some games will require you to relaunch them before the item will be downloaded.
Description
This is the sequel mod and successor to the original Terrain HD. This mod was separated from the WIP Orbis Terrarum as many seemed to enjoy the original Terrain HD as a standalone mod.

Screenshots taken with default brightness and gamma and Cities HD by Phazer! Highly Reccommended to use his mod alongside this one. Link here: https://steamcommunity.com/sharedfiles/filedetails/?id=1515544433

Lighting should appear more natural with brightness adjusted so that it is brighter than the original Orbis Terrarum and matches the original aesthetic of Rome II. Campaign textures have been modified so that they show more detail while remaining in line with Rome II's color scheme. Ocean shores and coastlines have been made more vibrant to show the multicolored waters of the coastal shallows and deep sea.

Maybe I'll think of something else to upload soon.

Compatibility:
Anything that doesnt edit the campaign textures or lighting.

UPDATE TO PERMISSIONS POLICY: As time has gone on, I have seen the ever increasing presence of donations and patreons associated with Total War Modding. I have a personal issue with the idea of linking any type of monetary function with modding and feel it is best to have the two entirely separate. Even donating to authors for their work is too near the chance of modders locking content behind paywalls and separating paid users from unpaid ones. It is for this reason that any mod page which links or has a donation system associated with it will have to speak to me directly and ask for permission. Individual modders who wish to use these assets should shoot me a message and Ill likely give permission. Mod teams will need to discuss the use of my assets with me.

Other mods to enjoy:

Special Thanks: ScipiotheGreat because he wanted it so much.
< >
80 Comments

Malata Societa' Official Feb 1 @ 5:59pm
if i use this mod not have a sense use this also right?
Better Water III HD

Malata Societa' Official Feb 1 @ 5:59pm
if i use this mod not have a sense use this also right?
Better Water III HD