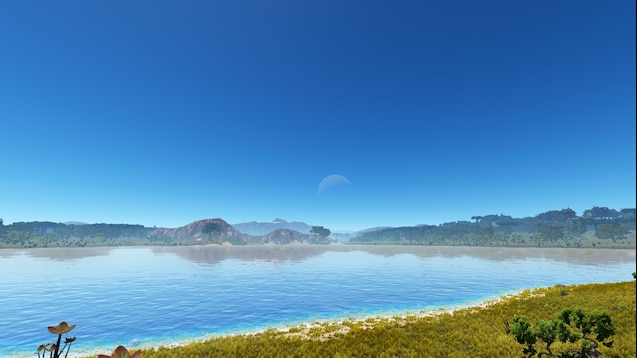 ravien_ff
Offline
See all 34 collections (some may be hidden)

This item has been added to your Subscriptions. Some games will require you to relaunch them before the item will be downloaded.
Description
As of Alpha 12 this scenario is obsolete and will no longer work.

This scenario randomly generates a new survival map on game start with double the planets as normal and adds a few minor enhancements.
It does not contain new types of planets, it merely increases the number of default planets that are generated.
Good for anyone who wants a randomly generated survival game with more planets without having to edit config files or subscribe to a static scenario.

This creates a default single player/coop Survival game with the following changes:

*Doubled min and max counts of non-starter planets, asteroid fields, and trade stations.
*Increased max number of moons per planet to 2.
*Added a Desert neighbor within 15AU to Arid starter to ensure you always have access to the resources needed to build a CV.
*Other starter planets are still added to the map even if you didn't choose them (you'll still be able to discover the Temperate starter even though you had chosen Arid as your initial start planet, for example).
*Barren, BarrenMetal, Lava, and LavaNascent are now separate entries. You will always get at least 1 of each planet in your solar system.


Because it uses the default planet templates, new game updates to planets are automatically applied whenever you start a new game using this scenario.

ravien_ff  [author] Dec 31, 2019 @ 12:12am
@magnificent you have to warp around until you find the planet that links to another solar system.

magnificent Dec 30, 2019 @ 11:48pm
excellent work! thanks for this scenario.. but i don't know how do we travel between solar systems?

ravien_ff  [author] Dec 17, 2019 @ 11:49pm
@Thundercraft it already does. Currently all random scenarios are hard coded to generate 2-6 solar systems, including this one. This one just has double the number of planets in each solar system.

This scenario might even be considered obsolete right now since the standard survival game now has a lot more planets than it used to.

Q: Will there be a version of this that supports a galaxy map? Specifically, will there be a Expanded Default Survival (double the planets) that doubles the number of planets in the entire galaxy map?

Colossal Sprout Oct 21, 2019 @ 7:39pm
Excellent mod, also doubles as a superb example/template for how to create custom randomised scenarios. Many thanks for creating and sharing, 10/10

ravien_ff  [author] Oct 4, 2019 @ 9:46pm
@LIQUID It's in your gameoptions.yaml. If modifying an existing save game, it should be under your save game folder for that save game.

You need to set (or add if it doesn't exist yet):
RegeneratePOIs: true

LIQUID Oct 4, 2019 @ 8:59pm
Also this game is really hard to find information on anytime I try to Google something about modifying game files or script or anything , do not a lot of people play this game orbarebthey all educated and figure it out on there own and not dummy's like me?
< >