Store Page
Kenshi >  Workshop > Howls@TheMoon's Workshop
This item has been removed from the community because it violates Steam Community & Content Guidelines. It is only visible to you. If you believe your item has been removed by mistake, please contact Steam Support.
This item is incompatible with Kenshi. Please see the instructions page for reasons why this item might not work within Kenshi.
Current visibility: Hidden
This item will only be visible to you, admins, and anyone marked as a creator.
Current visibility: Friends-only
This item will only be visible in searches to you, your friends, and admins. 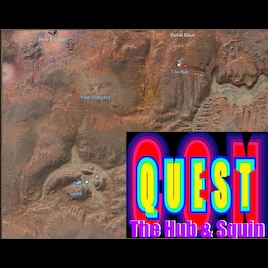 Howls@TheMoon
Offline
See all 52 collections (some may be hidden)

This item has been added to your Subscriptions. Some games will require you to relaunch them before the item will be downloaded.
Description
Time to takeover the Border Zone!

If taking over the Hub for a player town complete with fully equipped bar and Thieves tower to rebuild for yourself sounds like fun, or working your way up to taking over Squin to rule the Border Zone, then you might want to give this a try.

This mod adds a npc to the Hub (Slumlord) that can be disposed of to take ownership of the Hub as a player town.
If you add this to an existing save it will require an import for the slum lord to show up.

If you are using any mods that rebuild the hub and you put it below this mod in the order list, when you takeover you will most like get most of those building and furniture too. (works that way with bounty quest mod)

After takeover The Hub can have afew bar squads to buy stuff and some mercenary squads to hire. The Thieves guild are also present looking for a place to relax (the Bar). To get these npcs it does require an import after takeover, and you have to return to the Hub first to make sure the takeover took effect.

Also added is an override state to take over Squin. This requires taking out several high lv Shek characters and proceding through multiple vanilla overrides states.

Squin will have a few mercenary squads and the Thieves guild is also present roaming town. All the building and their contents will belong to you to do with as you please.

It works the best when taking Ghost out last who can be found in Squin if the other 3 are taken care of (Esata,Mukai,Flying Bull) but will work either way with an import after all four are dead.

This mod may conflict with other mods that add overrides to the Hub or Squin but if your using something like that let me know and i will see if we can get compatibility.

This mod works fine with https://steamcommunity.com/sharedfiles/filedetails/?id=1588210960
which adds a player take over to the small town of Mirage.
< >
204 Comments

hickorie Jul 4 @ 1:52pm
Im not that comfortable with this modding reload, but tried to do so with modloader off/on again and shit+F12 ingame to "fix issues" - that what ive found about on similar Hub mods readme's so far.

Howls@TheMoon  [author] Jul 3 @ 3:37pm
My guess is you have another mod that effects the Hub. That is the only scenario that he didn't appear in testing this.

hickorie Jul 3 @ 10:20am
No matter what I do, the slumlord does not appear or I cant find him. May I have to wait a few hours or days? Some buildings seem to be misplaced or blocks entry to a few buildings. Is that correct?

Frission Jan 18 @ 5:57pm
Slum lord shows up but after I killed him nothing happened. Sadge. :<

Unfulfilled Desires Nov 12, 2021 @ 2:26am
So ive had issues where just loading the game again will duplicate Hub, as well as the heavy majority of other settlements, when i imported, it just doubled everything again, not sure what to do about this, but its worked otherwise, bad luck on my part or is it just too out of date and being buggy?

StrawWagen Apr 2, 2020 @ 1:15pm
Mod sort of works, but so far it's caused more headaches than it's worth, something i'm doing is causing duplicate hubs to be created, etc. If I was going to subscribe to this knowing what i do now, I wouldn't have installed it.

Monki Feb 17, 2020 @ 2:37am
Mod still works perfectly for me. If it doesnt work for you, make sure the slum lord is dead, not KO'd, put the mod is at the top of your load order and import your save. When you return to the hub, some of the buildings will be rebuilt and there will be more characters roaming the city.