Greenlight > Games > RuneStorm's Workshop
Greenlight is being retired. For more information on how to submit games to steam, refer to this blog post.
This item has been removed from the community because it violates Steam Community & Content Guidelines. It is only visible to you. If you believe your item has been removed by mistake, please contact Steam Support.
This item is incompatible with Greenlight. Please see the instructions page for reasons why this item might not work within Greenlight.
Current visibility: Hidden
This item will only be visible to you, admins, and anyone marked as a creator.
Current visibility: Friends-only
This item will only be visible in searches to you, your friends, and admins.
Viscera Cleanup Detail
Description Discussions123 Announcements17 Comments2112 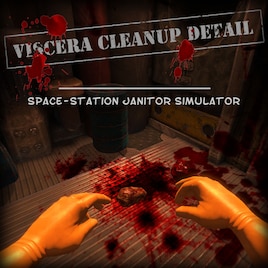 ShadowBlade
Offline
See all 269 collections (some may be hidden)

Behold the new trailer for the launch: http://www.youtube.com/watch?v=1S7Rnu5EIcI
In this update, we have: 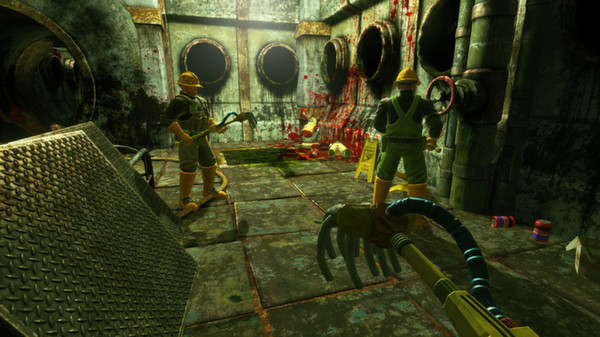 For those intrepid souls that pre-order Viscera Cleanup Detail, the alpha build has just been updated to v0.24.
This brings a raft of fixes and new features, including:

Find out more over here on our blog.[www.runestorm.com]

We are still aiming to have VCD up on Early Access in the next few weeks, so if you want to have a few less issues to contend with, you can wait that out.

As always, you can help us out by pre-ordering VCD[www.runestorm.com] for $7 and get the latest alpha build.
Read More
Description
Release date: Early/mid 2014
Viscera Cleanup Detail
The space station janitor simulator

You can also help support us by pre-ordering the game for $7 right now, {LINK REMOVED}RIGHT HERE.

Disaster! An alien invasion and subsequent infestation have decimated this facility. Many lives were lost, the facility was ruined and the aliens were unstoppable. All hope was lost until one survivor found the courage to fight back and put the aliens in their place!
It was a long and horrific battle as the survivor dueled with all manner of horrific life-forms and alien mutations, but our hero won out in the end and destroyed the alien menace! Humanity was saved!

Unfortunately, the alien infestation and the heroic efforts of the courageous survivors have left rather a mess throughout the facility. As the janitor, it is your duty to get this place cleaned up.
So grab your mop and roll up your sleeves, this is gonna be one messy job.
Today, you're on Viscera Cleanup Detail!

This game is still a very early alpha prototype. Don't expect it to be perfect or resemble a completed game at all!

You can also support RuneStorm by checking out Rooks Keep, which is on sale and has a demo:
{LINK REMOVED}Rooks Keep website
Or vote for Rooks Keep on its Greenlight page
Rooks Keep greenlight

A JANITOR Sep 24, 2016 @ 3:39am
my how this game has grown:)
the ugly duckling that turned into a swan
blo@dy beautiful game RuneStorm
godspeed for your next game can't wait
man how old is this page its what makes VCD shine=the game that flowered into a janitorial masterpeice

SuperFryGuy Feb 14, 2015 @ 3:05pm
huh. makes me feel weird that thos game was released not that long ago i cant imagine steam without it

Viscera Cleanup Detail has been Greenlit and is now listed in the Steam store. For the latest information, purchase options, and discussions for Viscera Cleanup Detail, please see it on the Steam Store or in the Steam Community.
Visit Store Page
For more details Visit Community Hub
For latest discussions
If you really, really want to, you can continue to the Greenlight page. Information on this page may be out of date, since all the action has moved to the areas noted above.