Greenlight > Games > Quarx's Workshop
Greenlight is being retired. For more information on how to submit games to steam, refer to this blog post.
This item has been removed from the community because it violates Steam Community & Content Guidelines. It is only visible to you. If you believe your item has been removed by mistake, please contact Steam Support.
This item is incompatible with Greenlight. Please see the instructions page for reasons why this item might not work within Greenlight.
Current visibility: Hidden
This item will only be visible to you, admins, and anyone marked as a creator.
Current visibility: Friends-only
This item will only be visible in searches to you, your friends, and admins.
Robot Rescue Revolution
Description Discussions8 Announcements3 Comments1293 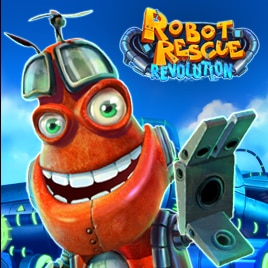 Will
Offline
See all 26 collections (some may be hidden)

We have been quiet for a while working on the Steam version of Robot Rescue and it's almost ready!

Coding is all done (with Steam Cloud, Leaderboards, Achievements and Trading Cards), but we would like to ask you to be patient for a little while longer. We are waiting for ESRB, PEGI and USK ratings required to release the game (I think we should have them within 2-3 weeks). Your Steam codes however are already generated and accessable here: http://www.teyon.com/steam/robotrescuecodes
They will work as soon as the game is released.

By the way, we have started similar promotion for our on-rails shooter Heavy Fire: Afghanistan, more info on the Steam Greenlight Page.

Thank you for your support and patience!

Thank you to everyone who voted for Robot Rescue Revolution and helped our robots get onto Steam!

At the moment we are working to finalize the game and make it available on Steam. If you joined the Robot Rescuers Group we will soon announce when and how you will receive your FREE codes!

Stay tuned and thanks again!

EVERY SINGLE ROBOT SHARES LINKED CONTROLS!
Dodge flamers breathing scorching fires and deactivate paralyzing Tesla machines as you guide wacky robots trapped in treacherous labyrinths to the exit! Plan every escape with precision and execute each action with cautiousness as the synchronized movement of the robots hinders a simple plan! Unravel over 100 levels of challenging robotic fun in this unique and quirky puzzler!

COMPETE OR CO-OPERATE WITH BUDDIES
Join forces with a buddy and use each other’s robots to help one another escape from these obstacle-ridden mazes in Co-op Mode! Be careful! As soon as one robot goes astray it’s GAME OVER for the both of you!

And if you're feeling a little competitive, then take the logic battle to a whole new level and fight it out to the finish line in Compete Mode! Race on two identical but separate maps and test each other’s quick-thinking skills to see whose robots will escape the maze first all in one piece!

Step into the shoes of the developers and become the brain behind the puzzles with the additional feature of Map Editor. Utilize all elements and objects, select from different worlds and then upload your master creations online to share with the rest of the Robot Rescue community for even more puzzles to crack!

THESE ROBOTS HAVE HISTORY!
The first Robot Rescue games were released on Nintendo handheld consoles and this reincarnation of the game is also available on PS3/PSN. Watch the video review to see the real game-play and impressions. The online shared maps will be cross-compatible between PS3 and Steam!

Originally posted by The Palace of Wisdom:
“For those looking for a challenging brain teaser with a unique twist, look no further.”

Originally posted by GertLushGaming:
“It is worth its price and you can get a lot of pad smashing, swear word creating fun out of it. Worth a look for sure.”

Robot Rescue Revolution has been Greenlit and is now listed in the Steam store. For the latest information, purchase options, and discussions for Robot Rescue Revolution, please see it on the Steam Store or in the Steam Community.
Visit Store Page
For more details Visit Community Hub
For latest discussions
If you really, really want to, you can continue to the Greenlight page. Information on this page may be out of date, since all the action has moved to the areas noted above.