Store Page
ARK: Survival Evolved>  Workshop > EddyChomps's Workshop
This item has been removed from the community because it violates Steam Community & Content Guidelines. It is only visible to you. If you believe your item has been removed by mistake, please contact Steam Support.
This item is incompatible with ARK: Survival Evolved. Please see the instructions page for reasons why this item might not work within ARK: Survival Evolved.
Current visibility: Hidden
This item will only be visible to you, admins, and anyone marked as a creator.
Current visibility: Friends-only
This item will only be visible in searches to you, your friends, and admins. 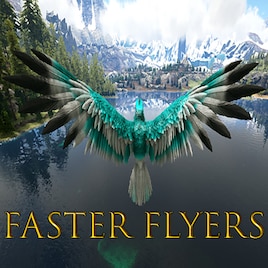 EddyChomps
Online
See all 251 collections (some may be hidden)

This item has been added to your Subscriptions. Some games will require you to relaunch them before the item will be downloaded.
Description
Faster Flyers
As the name suggests it's Flyers that are Faster.

Must be first in mod order.

The Idea behind this mod is to bring back some of the classic awesomeness to making flyers faster, but to prevent them from becoming overpoweringly fast.

Most flyers can level speed but stats are clamped a predetermined percentage. No need to worry about wasting points, as when max level is reached you can no longer add any points to speed.

All of these flyers will no longer take off when mounted. (They stay put on the ground)
Also no more getting thrown off a cliff when you dismount. You just stand up on the dino’s back.

Argy, Snow Owl, and Tapejara now allow use of weapons while mounted.

Almost all can walk backwards on the ground to back out of tight parking spots.

Almost all flyers get some imprinting bonus to speed and some get bonuses to stamina as well. In order to obtain the max intended speed the flyer must have a full imprinting bonus.

The Griffin now has genders and can be bred. (Gives birth to live babies)
There is also a Griffin Saddle craft-able in your inventory. (I do not have a mesh for it)
This Saddle can be disabled via INI. Setting the following to True will remove saddle slot from Griffin
[FasterFlyers]
DisableGriffinSaddle=False

Snow Owl, Pelagornis and Argy can now run on the ground when you are mounted.

The Phoenix now has air braking and backwards flight and is less firery for better visability. (Adding breeding is not something I plan on doing.) Since the Phoenix will only normally spawn on maps with superheat, the normal spawn code will spawn it but will not be visible unless there is a super heat so it may not easily work on many maps, so there is a second spawn code option but they spawn above your head at a random level with the second option.

Lymantria can now be bred.

I have added some more color options for most flyers to spawn in. They are a more rare spawn and at level 100 and up.

Looking for a Server Host? I would recommend

[gameserverapp.com]
Please use the above link to get you set up with your own server today.

Any questions or suggestions you can contact me on my Discord here
https://discord.gg/nftfDZ8
Attention
Wyverns have been permanently Removed.

Breeding and MS does not work
Rhada

EddyChomps  [author] Jul 30 @ 7:47pm
Yes I know it has messed a lot of creature mods up and until I get and dev kit update I'm Not sure I can fix it. I know my test server is working but know other are having issues.

gwSenpai007 Jul 30 @ 7:42pm
Also on another note, a few of my servers using this mod in 1st order keep crashing after this current update

gwSenpai007 Jul 30 @ 7:41pm
Funny you say that cryptic howl - this is literally the only mod I know that allows flyer speed, but also a cap on a certain speed, any other mod you use would give valid reason to complain because they have no limits whatsoever....I find this mod to be the most balanced in existance

Cryptic Howl Jul 27 @ 10:41am
I love this mod however I find flyers get a bit too fast when imprinting them.

EddyChomps  [author] Jul 19 @ 8:54am
They were causing spawn issues so they were removed from the mod. No longer supported but vanilla still spawn.

Edgelord Jul 19 @ 5:57am
What do you mean "Wyverns have been permanently removed"?
The support to Wyverns for this mod?
They can no longer spawn in the game?
Which one is it?

EddyChomps  [author] Jul 5 @ 4:04pm
I am thinking that one of the latest updates to ark may have screwed something up. I am investigating the issue but as of this far cannot reproduce it.

Kiba Jul 5 @ 10:34am
We're on The Island, we have S+, DinoTracker, Awesome Spyglass, and Awesome Teleporters. Faster Flyers was highest priority.