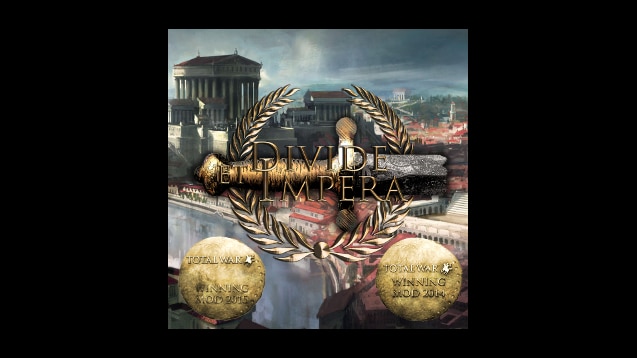 This item has been added to your Subscriptions. Some games will require you to relaunch them before the item will be downloaded.
In 1 collection by Penguin
Rome II DeI

12 items
Description
This submod aims to make unit sizes, especially the Romans a bit more historical by slightly adjusting the sizes.
A Roman unit now represents half a Cohort with 240 man. This will allow you to make a nice and orderly legion with as close to historical numbers as possible.
It's not just Roman units. All factions had their units enlarged a bit in some way.
Pikes are still they same at DeI's 256 since that's very accurate.
Also Cavalry is not changed.

Load the submod above DeI and other mods that edit units!

Thanks for ScipioTheGreat that helped me find my footing in TW modding :)
and of course the wonderful Divide et Impera mod that made me play this game in the first place <3
< >
114 Comments

TonySplash Nov 13, 2021 @ 8:54pm
There is a submod linked below that is updated so don't bother with this anymore.

Comandante Uldo May 18, 2021 @ 2:41pm
Is there a version of this mod for vainilla? or a way to introduce units sizes of Dei to vainilla?

Hidden Salami Nov 18, 2020 @ 11:43am
THIS! I have longed for a numerically proper legion since the ancient times of Rome 1! I will offer a human sacrifice to the gods each day until this is updated! =D

ImCaligula Oct 22, 2020 @ 2:34am
+1 for an update. Had a sudden urge to avenge Teutoburg after seeing the trailer of barbarians, but it ain't the same if I can't stomp the scum with a sea of Legionnaires. Thanks in advance

dhgsupernova98 Oct 21, 2020 @ 3:03pm
Because your mod is currently outdated I've only been on Attila and Empires just waiting and hoping you'd come back
< >