Store Page
Hearts of Iron IV>  Workshop > Rauchmann's Workshop
This item has been removed from the community because it violates Steam Community & Content Guidelines. It is only visible to you. If you believe your item has been removed by mistake, please contact Steam Support.
This item is incompatible with Hearts of Iron IV. Please see the instructions page for reasons why this item might not work within Hearts of Iron IV.
Current visibility: Hidden
This item will only be visible to you, admins, and anyone marked as a creator.
Current visibility: Friends-only
This item will only be visible in searches to you, your friends, and admins. 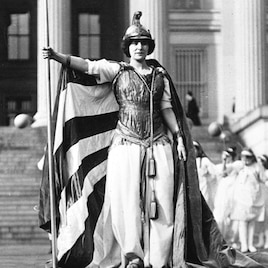 Rauchmann
Offline
See all 7 collections (some may be hidden)

This item has been added to your Subscriptions. Some games will require you to relaunch them before the item will be downloaded.
Description
Replaces state leaders with women.

Currently, the mod only changes the leaders of the major nations that appear on the "Select Country" screen. Other nations will be altered over time. May conflict with any mods that alter the countries altered by the mod.

This mod is not dead, but due to a lack of time and the complexity of researching notable women of this era, there will be a large delay between updates.

Roadmap
The next leaders to be implemented will be the rulers of the British Commonwealth nations (Australia, British Malaya, Canada, the Raj, South Africa, and New Zealand).

Following these, the next most likely candidate for new leaders will be the minor nations of Europe.

If you have any suggestions for potential leaders for any country, or better candidates for countries that have already been modified, please leave a comment with your suggestion. All comments are read, even if they are not replied to.

Please note that South Africa has no female leaders in this match, and some countries are missing some leaders. This is due to a lack of available information on women in these countries during this time period. If you have any suggestions or research material, please comment below.

Canada:
- Replaces Mackenzie King (Democratic) with Agnes Macphail, the first female member of the House of Commons of Canada.
- Replaces Tim Buck (Communist) with Rae Luckock, a socialist elected to the Legislative Assembly of Ontario.

New Zealand:
- Replaces Michael Joseph Savage (Democratic) with Elizabeth McCombs, the first woman elected to the Parliament of New Zealand.
- Retains Elsie Farrelly (Communist) with an updated portrait to match the other portraits introduced by this modification.

Adseria Mar 16 @ 11:47pm
I mean, a nice update would be one to make it work with the latest version of the game.

Rauchmann  [author] Mar 6 @ 4:28pm
To those still visiting this page, the mod is not dead, but due to a lack of time and the complexity of researching notable women of this era, I stopped updating it a few DLC ago. I will update the mod if specific updates are requested. Suggestions for more historical women are always welcome.

DrDalek Oct 12, 2019 @ 6:58pm
The mod seemed not to be working if its actived alongside any extended technology mod (add technologies, RT56 Technology mod etc).

Rauchmann  [author] Jun 22, 2019 @ 3:48pm
It appears that some of the files had a few syntax errors in them that were preventing them from working properly. This should now be fixed.

If the update doesn't work, check that you don't have any other mods that replace leaders or states. If you don't, let me know that it doesn't work.