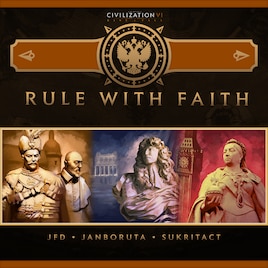 sukritact
Online
See all 131 collections (some may be hidden)
You need DLC to use this item.

This item has been added to your Subscriptions. Some games will require you to relaunch them before the item will be downloaded.
Description
========================
OVERVIEW
========================
IMPORTANT This mod is not currently being updated, maintained, or developed. This is simply a matter of my own personal disillusionment with Gathering Storm, and should not be considered a reflection on the state of modding for Civ VI atm (well, its partly that). I'll re-visit the mod after the development cycle for Civ VI has ended.

This is a re-release of Rule with Faith. Rule with Faith is an overhaul of and expansion to existing game mechanics, with a focus on fleshing out the game's political and religious elements.

Current Features
Requires Rise and Fall. Vanilla may be available in the Links below. Don't bother asking for a Vanilla-compatible version; if it doesn't exist already, there won't be one.
========================
TROUBLESHOOTING
========================
If you're experiencing issues, it's highly likely to be a mod conflict. I don't know and can't support your modding setup as it is unique to you. Other issues include the DLC Load Order bug, which you can read more on below. Otherwise, if you think you have a legitimate bug, you can post a bug report on the Home Page[forums.civfanatics.com] with your database and modding.log files.

By downloading and/or installing this mod you are agreeing to the following terms. This mod is distributed for free and provided as is, without any warranty of any kind whatsoever. You are using this mod at your own risk. You may not re-distribute, re-host, share, alone or as part of a bigger package this mod or its assets for any commercial or non-commercial purposes except where expressively and in verifiable writing given the permission to do so by the authors of this mod. All rights not described in this license agreement belong to their respective owners.
========================
LINKS
========================
See below for troubleshooting and more info.

Home Page[forums.civfanatics.com]
JFDModding Wiki[jfdmodding.wikia.com]
Direct downloads are available below. Some content is available for Vanilla but this isn't guaranteed and is otherwise not supported. If it is not there, it won't be made for Vanilla.

M Nov 27, 2021 @ 1:29am
This was one of the best mods ever created and its a shame about that you don't want to update it. It was a great way to use the faith mechanism

also climate change is a real threat to life

Jfritz60 Jan 22, 2021 @ 12:01pm
I have all the updates and DLC and while THIS MOD doesn't work, most of its components can be used without compromise. It just takes some trial and error but is TOTALLY WORTH IT!!