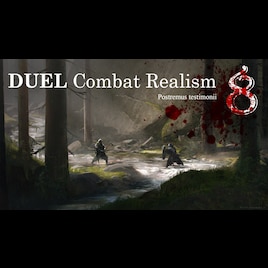 LogRaam
Online
See all 2447 collections (some may be hidden)

This item has been added to your Subscriptions. Some games will require you to relaunch them before the item will be downloaded.
Description
Please visit the Nexus Page for more information: http://skyrim.nexusmods.com/downloads/file.php?id=2700

Duel Combat Realism is a mod that improves the combat system of Skyrim, making them more realistic. It will allow you to cover yourself with your shield, parry with 2-handed weapon, and come up with new fighting strategies using your anticipation and cunning. Since its first release, Duel Combat Realism has become a must for most players.

The purpose of this mod is to create the best combat experience, with an emphasis on the parry system; modifying the use of shields, stamina, and an improved fighting A.I., among other features. All designed using the basic functionalities of the Skyrim combat engine.
My priority is to offer an add-on that combines performance, stability and balanced combat.

How is it done? Mostly by adjusting vanilla engine to better represent reality; specific types of weapons will have different effects depending on equipments, strenghts, fatigue.. for example, staggering effect is greater against smaller opponents or by using a mace and a 2h-sword have greater chances to unbalance you even if you raised your shield to protect yourself. Duel's purpose is to simulate a more realistic fights from its context, and to avoid predictable patterns by implementing a randomizing engine under a statistical layer.
Let me try to tell you why Duel is the best combat mod available for Skyrim..

History
Duel has been created on 5th December 2011. This makes Duel the first combat mod to be created for Skyrim. Since then, 5 major versions have been made based on gaming experience and players feedbacks. Actually, Duel is very stable and well balanced; no major updates is planned as it already achieves the best gaming experience.

Gameplay
The core engine of Duel changes many things about combat. Instead of explaining to you every tweaking I've done through this mod, I’ll tell you about its gameplay.

Fighting is about strength and cunning…
In Vanilla, every hit will do damages to you, even when you raise your shield. The armor rating will reduce them and using a shield will raise your overall armor rating. Simple. Health in Vanilla is something between vitality and endurance, and stamina is related to "fatigue".

Duel’s philosophy is different. Your health represents your vitality (how many hit you can get before been killed), and your stamina is your skills at blocking blows. More precisely, your stamina is your balance and your ability to take the initiative upon your opponent; the more stamina you have, the more proficient you are when it comes to a close combat fight. It is a good idea to invest into your stamina if you want to be a warrior.

With Duel, your stamina regenerate faster than Vanilla’s. Because stamina is your ability to take the initiative upon your opponent, it is more about timing than overall endurance.

Your health take longer time to regenerate because in real life, wounds don’t regenerate without some assistance (magic, potions, food, …) and a bit of time.

Blocking could save your life
In Duel you can turtle behind your shield. Taking cover using a good shield should take away most of damages. But, if you are low on stamina you won’t be as effective when blocking and you will sustain some damages. Be careful 'cause it could be a problem at low level when you don’t have a high stamina score.. but with experience (and more stamina) you’ll be more proficient and able to avoid been hurt when covering behind your shield.

You can also block with a weapon.. it won’t take away as much damages than using a shield, but it definitely more effective than what you get in Vanilla.

Staggering
You or your opponent may be somewhat unbalanced after a good blow. Your remaining stamina, the strength of the opponent, and the weapon used are all factors used to calculate the stagger chances. A huge barbarian hurling a war hammer have a greater chance to unbalance you than a thief trying to stab you with his dagger. The good news is that if you use a heavy weapon against your opponent, you may stagger him as well. More experienced warriors have grater chances to unbalance their opponents.

Unlike Vanilla’s, staggers is not a “paralyzed state”; it’s rather an unbalanced stance where you can still block or strike, but you can’t walk/run.

Weapons and armors
Weapons in Duel are a bit more lethal. They’ll do 20% more damages than Vanilla’s.
Armors effectiveness is raised as well. Wearing them is a must!

Archers
Archers are dangerous foes. Their arrows are deadly. If you have to face them, try to take cover. Shoot them back with your bow or try to get in close combat.

Shield bash & knockdown
Enemies will recover faster from shield bashes. This should avoid some exploit.

Sneaking
In Vanilla, the eye icon tells you if the enemy had spotted you. In Duel, this is different. The eye icon tells you the level of alertness your opponent have. When an enemy is on alert, he will try to find you.. that means he is aware that someone is there even if he doesn't spotted you yet. You can still try to flee or get cover and hide to make an ambush.. Remember, open eye icon doesn't mean the enemy see/saw you.. it means the enemy is on alert state and will try to find you.

Sneaking in Duel is challenging, but more satisfying. Take time to learn how to sneak and ambush a camp.. strategy is more than charging without thinking after all.

A.I.
Duel feature a huge overhaul about NPC A.I. Now, NPC will know how to fight. They'll have a better understanding what is timing so they'll be able to stagger the player properly (with a purpose).

Opponents will do their best to beat the hell out of you!
They'll try to flank you.
They'll know how to fight in a team: for example, with a team of 2 fighters and 1 archer, a typical attack could be that the first fighter try to stagger the player, the second one try to flank him and land a critical hit, and the archer try to shoot at the player at the same time.
Badly hurts enemies will try to flee and save their lives.
When player kill an enemy in a distance, the other teammates will stay alert and will try to track down the player to seek vengeance.. even if this take a week (this should fix an exploit where enemies rely to their imagination even when their allies got killed by a distant archer. Real peoples just don't do that).
If they don't find you, they'll still organize their camp to defend themselves against the "killer".

Outnumbering
In Duel, been outnumbered is very dangerous. Avoid it at all cost. Try to think about a plan when it comes to attacking a group of enemies. Use traps, snipe with your bow and ambush them. Running head down into a group is suicide.

ENGINE:
- No known bugs to this day;
- ACE - Comprehensive Enhancements compatibility fix available at: download section here (no more needed, Duel 5 fix that);
- No known incompatibility, but other combat mods (DC, ACE, ...) mixed together may unbalance combat experience;
- Optimized: Little to no lag, very responsive;
- Optimized engine: Duel 5 will support very large scale battlefield without lags. This is needed for WIS, Warzone and the likes;
- Well balanced;
- Little use of scripts, best use of native combat engine layers.
< >
997 Comments

LogRaam  [author] Apr 23 @ 5:09pm
There are different stagger forces, probably you could decrease the force to the minimum (in the mod) to reduce the movement of the camera.

Green Apr 23 @ 3:22pm
I'm alright with the stagger mechanic, it's just that I wished I could lower the intensity of the screen movement while staggered, especially in first person, you know make it like the how the screen normally moves when staggered in vanilla skyrim. I can't figure it out with the creation kit and don't find any help specifically with stagger animation values online. but in any case I like this mod alot in combination with better AI combat, thank you very much for your work.

LogRaam  [author] Apr 22 @ 9:06pm
@Green
No options available. You'll have to open the mod in the Creation Kit and modify the stagger values.

Note that you can still use your shield to block when staggered. And staggering the enemies is an advantage to consider.

Green Apr 22 @ 8:08pm
Is there a way to stop the stagger animation because it occurs very very often and the screen moves way too much too often over and over again. Any help about how to reduced the screen moving or stop it would be appreciated, thanks.

The difficulty does not affect Duel precisely, if only because your enemies will be more resilient.

There is no option with this mod. However, the source code has been published on the Nexus website. You could very well start from the Papyrus scripts and modify them to remove some features.

zammerson Feb 15 @ 5:54am
So quick question, does difficulty setting have any effect? Also where are the options to enable or disable stuff like locational damage and stuff? The game didn't require SkyUI so it must me somewhere else.

If you want bows to be that deadly, the numbers in the game need to reflect that.

LogRaam  [author] Oct 22, 2021 @ 7:06pm
"[...] suggested that the longbow could penetrate a wrought iron breastplate at short range and penetrate the thinner armour on the limbs even at 220 yards (200 m). He considered a knight in the best-quality steel armour invulnerable to an arrow on the breastplate or top of the helmet, but vulnerable to shots hitting the limbs, particularly at close range. [...]"