Greenlight > Games > simon's Workshop
Greenlight is being retired. For more information on how to submit games to steam, refer to this blog post.
This item has been removed from the community because it violates Steam Community & Content Guidelines. It is only visible to you. If you believe your item has been removed by mistake, please contact Steam Support.
This item is incompatible with Greenlight. Please see the instructions page for reasons why this item might not work within Greenlight.
Current visibility: Hidden
This item will only be visible to you, admins, and anyone marked as a creator.
Current visibility: Friends-only
This item will only be visible in searches to you, your friends, and admins.
Maia
Description Discussions17 Announcements5 Comments887 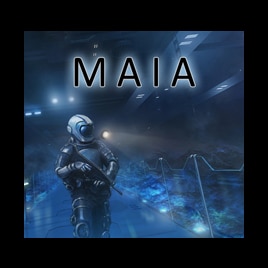 View Maia in the store

Here's a quick video that shows the current alpha of the game and some of the things you can try out in it! :)

All other considerations secondary.

Maia is a colony building game set in the not-so-distant future, twelve light years from earth. Your colonists make planetfall on the weather-beaten rock that is 3452C[MAIA]. Using the no frills technology and equipment that they've brought with them, they must make a new life for themselves.

As the colony commander, your task is to ensure their safety, to build facilities in which they can live and work and, most importantly, to research and understand this strange new world. The atmosphere on 3452C[MAIA] is somewhat toxic to humans and initial research suggests that it is inhabited by creatures of at least rudimentary intelligence. The planet's crust may also be rich with mineral resources.

Taking inspiration from games as diverse as Dungeon Keeper, Dwarf Fortress, Theme Hospital and The Sims, while drawing on the 1970s sci fi aesthetic, Maia is a game of strategy, management and construction. It's also a game of difficult decisions, of dark humour and harsh realities. Not everyone is up to the task of off-world colony command. Are you?

“Maia could be a truly extraordinary story generator.”

“Right up there in the top branches of indie games to stare at with creepily unblinking desire.”

“Promises to invoke the glory days of 1970s space films.”

“I can’t wait to see what stories it has to tell.”

Maia has been Greenlit and is now listed in the Steam store. For the latest information, purchase options, and discussions for Maia, please see it on the Steam Store or in the Steam Community.
Visit Store Page
For more details Visit Community Hub
For latest discussions
If you really, really want to, you can continue to the Greenlight page. Information on this page may be out of date, since all the action has moved to the areas noted above.