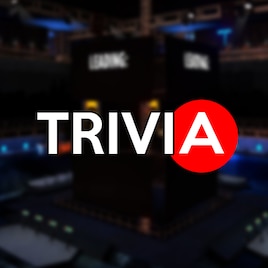 nano
Offline
See all 13 collections (some may be hidden)
You need DLC to use this item.

This item has been added to your Subscriptions. Some games will require you to relaunch them before the item will be downloaded.
Description
Trivia!
Trivia is a Versus based gamemode/map where you compete against your friends in a gameshow-like quiz!
Whoever gets the highest amount of points by answering correctly gets [s]to eliminate their opponents[/s] their well deserved prize!

Rules
The game consists of 10 rounds, each lasting 10 seconds.
Every question has a single correct answer, which when picked awards score.
The faster you reply with the correct answer, the more points you get.
The winner is the person who collects the highest amount of points throughout the entire game.

How do I add in my own questions? / Where are the questions from?

All the questions are fetched from the Open Trivia Database[opentdb.com], under the Creative Commons Attribution-ShareAlike 4.0 International License. We do not take any credit for them, neither do we run the site.
To add in your own questions, register for an account and submit it! Though your question might be straight out declined by the review staff.

Extras
You can customize the difficulty by telling the host to send !difficulty easy/medium/hard in the game chat.
To revert back, issue !difficulty any.

You can also customize the trivia API endpoint by issuing !api <url to your API endpoint>.
Though if you want to make your own endpoint, there are a few requirements:
- Every payload has to be compatible with the OpenTDB API
- You must send in only one question at a time, the script doesn't handle multiple questions at once
- It must be accessible from the internet (no private IPs)

To revert back the API, simply issue !api.

Credits
- noam 2000 - Making the map, designing it, doing the lighting, basically everything that wasn't scripting. Overall, if it wasn't to him, this mod simply wouldn't exist.
- nano - Scripting, lots of scripting and making the gamemode work.
- Ryason55 - Help with scripts and finding out the function to actually communicate with HTTP servers from worldscripts.
- Open Trivia Database - Hosting all of the questions and having a pretty good API to communicate with.
- Tower Unite - sound effects and original idea
< >
10 Comments

nano  [author] Nov 25, 2018 @ 6:40am
ah, the mod's winning conditions weren't really properly adjusted for singleplayer, but you can go into the menu, press "call vote" and press on restart map

nano  [author] Nov 24, 2018 @ 11:17am
i've tried to replicate the fun with TU trivia, and thanks to noam actually providing me with the amazing map to utilize my script on, it's really fun to play

Icky Thump Nov 24, 2018 @ 11:15am
I've got about 200+ hrs into it currently. Glad to finally start seeing some more frequent content updates coming to it lately since Workshop. I've seen a few unimpressive Android apps trying to utilize the API, but this is a whole new level. Can't wait to give it a try sometime.

at least that's my opinion

Why is this a mod?