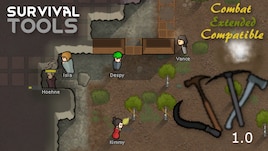 XeoNovaDan
Offline
See all 972 collections (some may be hidden)

This item has been added to your Subscriptions. Some games will require you to relaunch them before the item will be downloaded.
Description
Direct download from GitHub[github.com] (source[github.com])

Compatibility
Should be safely addable to existing savegames, though do note that you will need to make tools for all of your colonists if this is the case since they won't work at full speed otherwise. There may be some errors thrown when removing this from an ongoing save, though these should be harmless other than all tools being removed from that game.

Survival Tools is fully functional with the following mods:

* - Make sure that Survival Tools is below in the load order

Do note that if using this with Turret Extensions, make sure that this is below Turret Extensions in the load order otherwise errors will be thrown on startup. I am not sure how to fix this.

There have been reported oddities with Simple Sidearms (not on my end though) and Pawns are Capable; I will look into these in the near-future (as of 2018-12-13). That being said, there are probably many mods out there which this could benefit from functionality patching with! See the Discussions section for more information.

If you find any bugs, please link me to a full output log and give some basic information on how you triggered the bug; this is vital information for me to be able to fix said bugs.

Overview
Survival Tools adds several essential tools to RimWorld as well as an actual need to manage those tools. To make management easier, there is an outfit-esque system (configurable through the Assign tab) which allows for colonists to automatically pick up tools on occasions, depending on whether they actually need them or not. I'd also highly recommend using Cut Plants Before Building with this.

The following is a list of tools that are added, and what stats they affect:

If a colonist doesn't have any tools required for a certain stat, they receive a significant work speed penalty in that stat - though colonists with good tools will actually be more efficient compared to vanilla. Colonists can use tools either equipped in their main hand or directly from their inventory - the functionality to pick up items being added allowing for the latter, and in turn allowing non-violents to use tools. Colonists can only hold up to two tools at once in their inventory, though tool belts increase that to four.

Most tools can be produced at crafting spots or smithies, but can also be found in structures upon generation of a new map or purchased from traders and settlements. Tool belts are only producible at tailoring benches though, as well as purchaseable.

The overall effectiveness of a tool is determined by what it's made out of, as well as its quality. For example: a plasteel axe will be great at cutting down trees, and a uranium pickaxe will be the most effective at digging through rocks and otherwise extracting resources from veins.

Beware though, since tools do actually degrade over use! The useful lifespan of a tool depends on its maximum HP and its quality. If colonists are using tools that will degrade soon, an alert will show on the right-hand side of the screen prompting you to replace those tools.

Several features can be toggled, including the inventory limitation for tools and the degradation rate of tools as they get used. There is also a toggle for a hardcore mode which makes certain tasks completely impossible without tools (e.g. mining), as well as increasing the rate at which tools degrade.

Powered by the Harmony Patch Library - included with this mod; no additional downloads required.

License
You may include this mod in a mod pack, and you may make your own contributions to this open-source project (for which you'll be credited), but please inform me if you're doing so through Ludeon Forums (preferably) or the Steam Comments Section, and give credit where credit's due.
Popular Discussions View All (6)

Emelio Lizardo Jun 16 @ 12:26am
Are all critters required to use tools? That is, AI critters need and use them. Presumably tigers can't bit through rock without them.

Lecris Apr 12 @ 3:06am
An update to the update below. I have taken over the maintainance for a while, the currently maintained 1.1 version can be found here .

Jellypowered Mar 8 @ 9:42am
Just an update, I've almost got it all converted and debugged for 1.1
Probably just a few more days ladies and gents!

Thetaprime Mar 7 @ 7:28am
I should consider switching to jelly power...

Jellypowered Mar 2 @ 6:35pm
I've sent XeoNovaDan a message asking about the possibility of me porting this to 1.1
Stay Tuned!

MANIA-VENOM Mar 1 @ 4:45am
darn I really enjoy the mutlitool, I use them all the time x3