Greenlight > Games > Dancing Dinosaur Games's Workshop
Greenlight is being retired. For more information on how to submit games to steam, refer to this blog post.
This item has been removed from the community because it violates Steam Community & Content Guidelines. It is only visible to you. If you believe your item has been removed by mistake, please contact Steam Support.
This item is incompatible with Greenlight. Please see the instructions page for reasons why this item might not work within Greenlight.
Current visibility: Hidden
This item will only be visible to you, admins, and anyone marked as a creator.
Current visibility: Friends-only
This item will only be visible in searches to you, your friends, and admins.
Collateral
Description Discussions3 Announcements12 Comments345 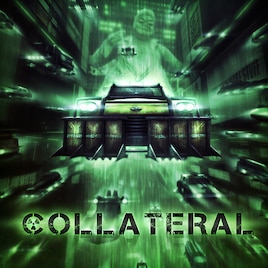 View Collateral in the store

So it would seem that after a long, busy day on Friday a certain announcement that had been written up was overlooked when leaving the office. Namely the one that was supposed to be posted here saying that Early Access will be going live tomorrow, specifically at around 11am Tuesday here in Australia or 4pm Monday Steam server time. No idea how that got missed. Nevertheless, we're excited!

So this is kind of last minute, but we’ve been offered some free space to exhibit Collateral at PAX Aus thanks to AIE, the Academy of Interactive Entertainment where the members of our company studied game development. You’ll be able to come and try the latest version of Collateral at the AIE booth all day Friday and the first half of Saturday.

We’re still inching closer to Early Access on Steam. This week we’ve been composing a new trailer to celebrate the release, sorting out as many bugs as we can, and generally trying to make the next version of Collateral as polished as can be. There are still some issues that aren’t going to be fixed just yet so that we don’t have to hold back the release any longer figuring out how to fix them, but we’re aware that they exist and will continue trying to fix them for next time.

Since we’ll be at PAX on Friday, next week’s update will come out on Thursday instead. Till then, thanks for reading. -David

Read More
Description
Release date: Mid 2014
Collateral
Step into the driving seat of a highly customisable and heavily armed flying taxi in the amoral cyberpunk future of 'Collateral'. You play as Zack Edgewater, an average Joe hover cab driver, caught between warring factions, bloodthirsty customers, and the corrupt corporations that run the city of New Bedlam. The city is under lockdown, and your goal is to earn enough favour with one of the city's factions to gain access to passcodes that allow you to leave the city. Win favour with your chosen faction by undertaking a variety of missions that test your speed, driving skills, and accuracy, then spend your hard earned cash on a huge assortment of weapons and upgrades for your cab. Every mission you complete brings you one step closer to escaping this depraved, maniacal metropolis.

New Bedlam is a large, open world environment consisting of several sectors, each with a distinct aesthetic and unique landmarks. Explore areas such as China Town, the Industrial Zone and the Redlight district.

In depth customisation allows you to tailor your taxi to suit the way you want to play. Performance enhancing vehicle upgrades give you an edge over your foes, and your cab's multiple weapon sockets allow you to deck yourself out with the ordnance of your choice. Customisable weapon groups give you even more control over your lethal arsenal.

Unlock and take aim with a huge variety of deadly weapons, including but not limited to, the ion cannon, mine layer, plasma cannon, gatling gun, cryo gun, buzz saw, burrito cannon, cluster bomb, drunken missiles, laser cannon, turtle mine, napalm, scuds and more! Experiment with combinations, turn your cab into a flying death machine and blast away your foes to your heart's content.

Unlike other car-based driving games, Collateral features a flying cab that can travel through the three perpendicular axes. We have implemented an arcade-style system that gives you control of your direction and altitude, whilst keeping the controls uncomplicated. This allows you to navigate through New Bedlam in a way that feels intuitive.

Collateral features a standing system, allowing you to form allegiances and rivalries with the factions and corporations of New Bedlam. Each faction has inherent advantages, such as access to special weapons unique to that faction, as well as cumulative rewards, like unlocking new city districts when enough favour has been gained. Complete missions to earn the respect of your favourite factions, and blow enemy factions out of the sky.

The allegiances you make with New Bedlam's factions have real effects on the appearance of New Bedlam. Choosing to undertake missions for particular factions can result in parts of the city being destroyed, permanently changing the landscape of New Bedlam.

Face off against enemies such as 'The Juggernaut', an aggressive semi trailer equipped with flamethrowers and cannons, or 'The Fuzz', New Bedlam's quick to the trigger police force, or even the average driver suffering a bout of road rage.

Undertake a variety of challenging jobs in order to earn cash for upgrades and win favour with the city's factions and corporations. Test your speed, accuracy and driving skills with assassination jobs, police chases, package deliveries, bank robberies, and more.

We are working with several composers, including Jay Taylor and Michael Chait, to produce an original soundtrack inspired by the chaotic, cyberpunk environment of Collateral. It will feature a selection of cyberpunk electronica tracks.

Who We Are
Dancing Dinosaur Games is a small independent game studio operating out of Melbourne, Australia. The company was formed by several of us who were studying together, and has expanded over the past two years to now consist of 8 members. We strive to make original, fun, humourous games we, as both developers and gamers, and our fans would like to play.
Popular Discussions View All (3)

Collateral has been Greenlit and is now listed in the Steam store. For the latest information, purchase options, and discussions for Collateral, please see it on the Steam Store or in the Steam Community.
Visit Store Page
For more details Visit Community Hub
For latest discussions
If you really, really want to, you can continue to the Greenlight page. Information on this page may be out of date, since all the action has moved to the areas noted above.