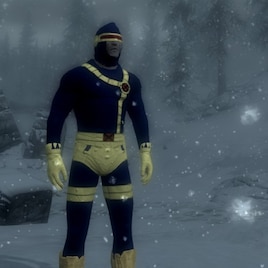 Valencia Gaming
Offline
See all 85 collections (some may be hidden)

This item has been added to your Subscriptions. Some games will require you to relaunch them before the item will be downloaded.
Description
UPDATE
I've pretty much maxed out the filesize for this mod. Meaning that it's essentially complete. I may do some maintenance here and there, but if I move on it will have to be in another mod.

Thanks for all the interest and feedback! I only ever started making this for myself so I'm glad that so many people seem to enjoy it as well. Feel free to continue reporting any problems you find, and maybe you'll see another mod from me. (I may or may not be working on some Power Rangers textures.)

THE MOD
Just thought I'd share the cache of superhero armors I'm working on. So far have:

-Aquaman and an Atlantean race that's a Nord clone that breathes underwater.
-Batman and Dark Knight Returns-styled Batman UPDATE now with wonderful batcowl thanks to the awesome Newermind43
-Captain Marvel
-Cyclops with two available visors
-Lightning Lad
-Spider-Man, Black Spider-Man, and Bagman
-Booster Gold
-Captain America armor and shield UPDATE now with cowl (the cowl is not perfect, I used an alpha layer to hide everything below the neck, but parts may be seen from certain angles given how the texturing works. I am working on this, but I felt it was mostly usable and included it)
-Captain Britain
-Green Lantern
-Thor (there are great mods already available for his hammer)
-Wolverine (there are wonderful pre-existing mods if you want claws)
-Also, a tuxedo, mostly for disguised Batman.

I do not have the armor placed anywhere in-game; you can access it from the command console. Just open the console and type help batman 4 or help marvel 4 and then find the Item ID for what you want to add, then type player.additem (itemID) (quantity to add). Check out the READ ME board for item IDs


If you've enjoyed this mod, please rate/favorite it! Also I take suggestions on the discussion board, as well as the comments.

LEGAL CRAP:
All characters copyright and owned by their respective creators. DC (c) DC Comics, Marvel (c) Marvel Comics, and so on. I do not claim to own any of these characters.

Other mods featured in pics/vids but not included in this mod:
Hammer of the Gods (thor's hammer) http://steamcommunity.com/sharedfiles/filedetails/?id=98017189&searchtext=hammer+of+the+gods

The Batman cowl model comes from a wonderful mod by newermind43 which can be found http://www.nexusmods.com/skyrim/mods/25099/?. Thanks again, newermind43, for letting me include recolored versions of it that fit my mod in here. Again, 100% credit for the creation of the batcowl goes to Newermind, I merely recolored it and implemented it.

The dancing mod seen in the vids was not created or edited by me at all. It's a fantastic and fun mod by Fores called Fores New Idles in Skyrim, and it's available at Nexus Mods here http://www.nexusmods.com/skyrim/mods/11811/?
Popular Discussions View All (3)

smackhedjoe Jul 16, 2016 @ 1:02am
to get them go into console type help "whatever one u want" the the id's will show up. once they do type player.additem "whaterver id u want that have shown up" then how many u want