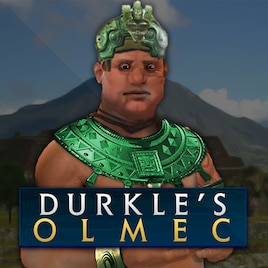 Durkle
Offline
See all 13 collections created by Durkle and other people (some may be hidden)
You need DLC to use this item.

This item has been added to your Subscriptions. Some games will require you to relaunch them before the item will be downloaded.
In 1 collection by Durkle
Durkle's Civilizations and Leaders

7 items
Description
Adds the Olmec to the game led by Po Ngbe! Requires Rise and Fall.

The mysterious and long lost ancestors of the Aztec, Maya, and more return to the fray. Use the power of science and religion to transform the harsh land around you into a jungle paradise. Expand your trade network across your continent, forging the way with the strength of obsidian. Do this, and you can once again earn your reputation as the mother culture of Mesoamerica!

Unique Unit: Obsidian Warrior
Strong spearman replacement unique to the Olmec. Can move and see through forest and rainforest. Kills yield Science equal to 50% of the Strength of the defeated unit. +5 Strength while in a Golden Age.

The city state of La Venta is replaced with Nanih Waiya, an ancient Earthwork which the Choctaw consider sacred.

pssst... kid... you want some good yields? put a holy site in between six rainforest tiles, put colossal heads around it, and then build chichen itza... that one's on the house
< >
21 Comments

Shuhrat Aug 10, 2021 @ 9:09pm
A wonderful mod. A very interesting nation to play with. There is only one nuance. It requires an update so that you can play using it in the latest version of the game.

Jokehr May 4, 2020 @ 9:09pm
It doesn't show up in GS for me, unfortunately. Ananga does, though, so I'm wondering where the issue is. It claims to require the Aztec civilization (which I got with the pre-order), but doesn't seem to recognize that I have them.

circeus Jan 20, 2019 @ 8:45pm
Dammit, I noticed this a while ago, and I just keep forgetting to say it: the Nanih Waiya ability has not actually been changed. It still lets the suzerain build colossal heads. (that may have to do with the blank historic moment too? XD)

Durkle  [author] Dec 14, 2018 @ 4:37am
You're correct, that's a RwF interaction. I'll fix it soon. As for the colossal head art, I'm pretty sure it's because the improvement already exists in-game as a city state unique, and therefore can't have moment art assigned to it. If I can find a way to fix it, I will. Thanks for the report!

1) I'm getting an error message [cdn.discordapp.com] for the civ name, given the "JFD", I'm guessing it's got to do with a Rule With Faith interaction? That mod had a wholly revamped version released recently.

Durkle  [author] Nov 2, 2018 @ 8:11am
UA has been nerfed. Rather than free trade route slots, there is a more thematically appropriate culture bonus.

Durkle  [author] Nov 1, 2018 @ 6:15am
I get your point. I'm probably going to nerf it so that trade routes have longer range when starting in a river city, or something to that effect.
< >