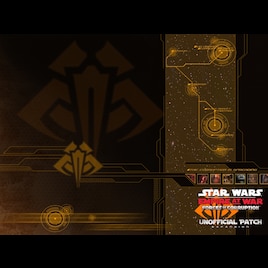 AlyMar1994
Offline
See all 37 collections (some may be hidden)
You need DLC to use this item.

[discord.gg]
The STAR WARS: Empire at War Community server is the premier source for Empire at War discussion! UFoCP is partnered with the server in an attempt to generate a larger community, and connect a wider audience of Empire at War fans instead of secluding them to side projects and areas. Join its Discord with the link below!
https://discord.gg/FgJKVEj

A comprehensive bug-fixing mod for Petroglyph's "STAR WARS: Empire at War – Forces of Corruption" ("FoC") expansion. The goal of the Unofficial Forces of Corruption Patch (also "UFoCP") is to correct as many errors that Petroglyph ignored within FoC as possible, to whatever limit is available within the Alamo engine.

NOTE:
THIS REQUIRES THE LATEST UPDATED PATCH FOR FoC ONLY! RETAIL VERSIONS ARE NOT SUPPORTED, ONLY Steam COPIES! THIS WILL NOT WORK FOR THE MACINTOSH VERSION OF THE GAME!

The overall point of the UFoCP is to be a comprehensive one-does-all patch for FoC. The goal: to eventually fix every bug with FoC not officially resolved by Petroglyph, to the limits of what's possible in the Alamo engine and community-developed tools, in one package.

MOD NOT LAUNCHING FROM "MODS" MENU

Try one or a combination of these fixes:

3). Run the game in windowed mode.

Theoretically all you'd need to do is create your campaigns, then copy over UFoCP's main campaign file, edit it, then launch the game with "STEAMMOD/MODPATH=[Submod] STEAMMOD=1548018187" and it should work.

Dragontamer247 May 16 @ 4:32am
This mod is amazing and I truly love the incorporation to fix all of the bugs of the game. One question I ask is there a way to incorporate a 1 planet mode into the mod?

Booki May 8 @ 5:40pm
Ooooo nice thank you! I can't wait to see the executor. I plan on replaying the vanilla game a little with this mod so that's nice :)

AlyMar1994  [author] May 8 @ 9:18am
@Booki -- The Executor is now apart of the Empire's tech goals in UFoCP. They should, and I've seen them build it, but it might take a while for them to get to Tech 5 and a Level 5 station. Starting on Equal Footing with Max Tech will give the Empire a Lv.5 station IIRC, so you should see Vader and the Executor pretty quickly.

AlyMar1994  [author] Apr 24 @ 9:56pm
@Mumion der Unsterbliche - I'm putting UFoCP on """feature complete""" if not a tad inconsistent for the time being. There's not much else on the list to kill right now before I merge the new GitHub. If you have bugs, please report them as best as you can.