Store Page
RimWorld>  Workshop > ChJees's Workshop
This item has been removed from the community because it violates Steam Community & Content Guidelines. It is only visible to you. If you believe your item has been removed by mistake, please contact Steam Support.
This item is incompatible with RimWorld. Please see the instructions page for reasons why this item might not work within RimWorld.
Current visibility: Hidden
This item will only be visible to you, admins, and anyone marked as a creator.
Current visibility: Friends-only
This item will only be visible in searches to you, your friends, and admins. 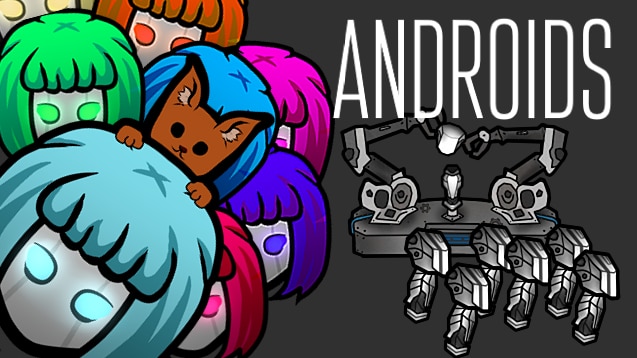 ChJees
Offline
See all 3379 collections (some may be hidden)

This item has been added to your Subscriptions. Some games will require you to relaunch them before the item will be downloaded.
Description
A race of humanlike robots which are mostly female in model variety.

A race of humanlike robots which are mostly female in model variety.

The origins of these machines are mostly unknown. Some speculate they are escapees from a civilization which used them for labor and some just suggest they are outdated pleasure machines which got dumped by a passing space freigher.

By design by their previous masters they are weak physically but their raw fortitude is enough to make up for it. Beware of their reactors violently exploding if they die by violent means or overheating.

Now you can discover and use the predecessors to Androids; the Droids. They are not much smarter than a improvised turret but they are relatively cheap to produce which make them easily replacable.

How do you use the repair kits?
jtjumper

Winter 17 hours ago
@Mcsqizzy No, droids shouldn't be throwing or attending parties at all. Might be an effect from a mod that alters pawn social behavior.

Nabsvsvi Jul 4 @ 11:19pm
@Armorguy1
There is a setting to disable the eye glow effect in mod settings

@Random Space Marine
The normal droids and battle droids get the soulless machine buff giving them a +2000 mood boost so nothing really affects them. Unless you're talking about the androids, there is a module called "Drone Mentality" that will pretty much make them a normal droid except instead of a +2000 mood boost they get a +200 and with the ability to learn albeit with a -90% to both social impact and global learning factor

Marzenie Jul 4 @ 11:31am
Autobots suffer from hypothermia, and the percentage of hypothermia does not decrease

Armorguy1 Jul 4 @ 9:59am
anyone know how to get rid of the eyeglow effect? It doesnt looks so great with my selfmade android face animations patch.

lolyouwish Jul 2 @ 8:50am
To anyone having the pink box issue when using this mod with Vanilla Expanded hair mod, a simple solution is to just make the affected pawn use the barber included in the latter mod. Have them use it, immediately select "confirm", and it fixes the problem.

pgames-food Jun 30 @ 6:24pm
(unless you are maybe using the Immortal mod based on Highlander?) :)