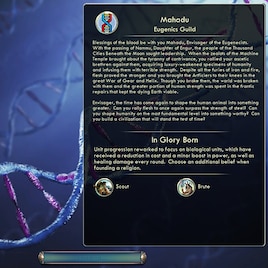 3 items
Description
A unique super-culture possessed of superior biological units and game-breaking advantages. Please note that this civ is NOT balanced against the others in the game. Only use it if you want serious advantages against the game. Alternately, set it as your foe for a truly daunting challenge.

New Leader: Play as Mahadu, Envisager of the Eugenecists. Due to my lack of artistic ability, the part of Mahadu will be played by Haile Selassie of Ethiopia.

New Trait: In Glory Born - Unit progression reworked to focus on biological units, which have received a reduction in cost and a minor boost in power, as well as healing damage every round. Choose an additional belief when founding a religion.

New Units: Almost all mechanical units have been excised from the Eugenicist unit tree (except for naval units and missiles), instead replaced with a unique advancement scheme filled with repurposed human and mounted units.

New Building: Creche - The cornerstone of every Eugenecist city, this replacement for the Granary provides a major boost to food generation and a smaller boost to happiness, production, culture, and science. It also promotes the production of Great People.

Note: In addition to Gods and Kings, this mod also uses resources from the Polynesia, Denmark, and Spain/Inca DLCs or Civilization V: Gold Edition. These are required for the mod to function properly.

Q: I have installed the mod and activated it correctly, but Mahadu isn't showing up under the list of leaders.
A: I've done some digging around the internet and it seems like this is a not-unheard-of problem with Civ 5 custom civilization mods in general. First, ensure that you have the Gods and Kings expansion installed and activated. If that does not work, try to unsubscribe the mod, clear your cache, and then restart Steam and re-subscribe to the mod. If you've done it correctly, the game will re-download the mod. If this does not work, then you have my apologies, but I have been unable to find any other solutions to the problem.
< >
32 Comments

WinterShade May 30, 2014 @ 8:48pm
This says it is multiplayer compatible but I can't seem to use it for multiplayer, and yes I am only using this mod, any help?

lordnequam  [author] Oct 21, 2013 @ 11:58am
@Corvo Attano - You're probably right that I should, but it was never really my intent to make these mods into a huge production. I don't imagine I'll modify them much from their current state.

Aphelion Oct 20, 2013 @ 10:36pm
i think this is a brilliant mod but i found that none of the pictures changed.
i thought you or maby a friend of yours who is good at art might want to make pics for the add ins.
just a sugestion...

paulwylievt Jul 13, 2013 @ 3:25am
What a mod! I can't stop playing it. All my old antagonists are being crushed under my feet, lol. Denounce me will you? Bam! Thanks for the city and resources haha! Great job here. Thanks for making it.