Store Page
XCOM 2 >  Workshop > Iridar's Workshop
This item has been removed from the community because it violates Steam Community & Content Guidelines. It is only visible to you. If you believe your item has been removed by mistake, please contact Steam Support.
This item is incompatible with XCOM 2. Please see the instructions page for reasons why this item might not work within XCOM 2.
Current visibility: Hidden
This item will only be visible to you, admins, and anyone marked as a creator.
Current visibility: Friends-only
This item will only be visible in searches to you, your friends, and admins. 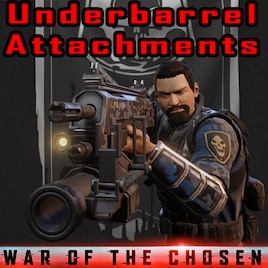 Iridar
Online
See all 2070 collections (some may be hidden)
You need DLC to use this item.

This item has been added to your Subscriptions. Some games will require you to relaunch them before the item will be downloaded.
Description
Mod adds:All of these items can be built in Engineering.

Underbarrel Attachments function like additional weapons, with their own stats and abilities. By default they can be attached only to Assault Rifles, but you can configure the mod to make UB attachments available to any weapon.

This mod also makes Rifles available to Grenadiers to make it possible to build a soldier around using an Underbarrel Grenade Launcher. Additionally, the Open Class Weapon Restrictions mod is used to provide access to mentioned extra items that provide reloads for UB attachments.

HOW TO ACQUIRE
Perform research.
Then you can build Underbarrel Attachments in Engineering one at a time for a modest cost in resources appropriate for each tier.

Additionally, purchasing Squad Upgrades for normal primary weapon Shotguns and secondary weapon Grenade Launchers will automatically upgrade not equipped Underbarrel Attachments to the next tier. In other words, when you tell Shen to upgrade shotguns, and she sees some spare Underbarrel Shotguns lying around in Engineering, she will upgrade them too while she's at it.

USING UB ATTACHMENTS
All Underbarrel Attachments are mutually exclusive with Bayonets, and they add a -10 Aim penalty to Reaction Shots, and -1 penalty to Mobility. Configurable.

Underbarrel Grenade Launcher does not allow you to launch standard grenades. It uses its own "ammunition".

By default Underbarrel Shotgun has three shots, and Underbarrel Grenade Launcher has one shot. You can build additional items that will provide extra reloads for both attachments.

Underbarrel Shotgun shots can Headshot the Lost and will respect abilities such as Light 'Em Up or Marauder.

Utility Items that offer extra reloads for UBGL count as "grenades" and should be compatible with all perks that increase grenades' carrying capacity, such as Heavy Ordnance. Perks that provide bonus damage and effects to grenades are more tricky, and will likely require me to add additional support. Right now it is confirmed compatible with Biggest Booms and Volatile Mix.

CONFIGURATION
Almost every aspect of this mod is configurable. Check the XComUnderbarrel.ini file for instructions and examples. You even get to fine-tune the attachments' position on the weapon model, though it would require a lot of .ini editing.

It is also highly recommended that you get my Weapon Skin Replacer mod, as that will enable a cruch that improves attachment positioning for certain Attachment / Rifle combinations.

Beam Grenade Launcher can be configured to use the same targeting logic as Blaster Launcher, though if you use that, you will probably want to add an Elerium Core cost to them.

COMPATIBILITY
Incompatible with Customizable Secondary Weapons. Using it for some reason makes UB attachments not appear on weapons.

Integration with Grimy's Loot Mod is out of the question.

COMPANION MODS
CREDITS
Credit to Aks for Russian translation.
Underbarrel Weapons research image and inventory icons by NeIVIeSiS.
Huge thanks to Community Highlander team for adding the necessary functionality at my request. Thanks to CX as a whole for a warm place to call home. Thanks to Spart for teaching me his kitbashing ways and for his sawedoff shotgun model. Credit to InternetExploder whose Beam Grenade Launcher was used as base for Beam Underbarrel Grenade Launcher.

Please support me on Patreon[www.patreon.com] if you require tech support, have a suggestion for a feature, or simply wish to help me create more awesome mods.
Popular Discussions View All (4)

batman_is_St0pid Jul 8 @ 9:43am
does resistance firearms work with this mod


@MrMister
You're right, it doesn't work. Looks like it never did. Shameful of me not to test that, but it is a pretty old mod and I barely knew what I was doing. Fix uploaded.

tac Jun 29 @ 6:47pm
I'm running this mod with your grenade scatter one. Currently, the grenades from this mod's underbarrel launcher isn't getting any scatter. I tried adding the ability tied to launching the underbarrel grenades (FF_Fire_UBGL_Conv, for example) into the appropriate ini, but it's still not working. Is there any advice you can give?

MrMister Jun 29 @ 9:37am
Hey Iridar, some testing reveals that UBGLs are failing to benefit from Volatile Mix's +2dmg, despite your documentation saying you've manually adjusted for it to work, and all the scripts to that effect that I've found within the mod.

I've tested it just loading only this mod + reqs (and Skirmish+ to make it faster), ini purge and all, and while the damage preview does show the +2dmg, it fails to inflict it on enemies.

I understand not wanting to touch an old mod, but could you confirm whether it works for you or not? I want to make sure it's something else wrong on my end.

Frosted Vert Apr 22 @ 9:12am
Phew, sorry trying to keep track of everything is wild