Store Page
Pro Cycling Manager 2018>  Workshop > Stylus's Workshop
This item has been removed from the community because it violates Steam Community & Content Guidelines. It is only visible to you. If you believe your item has been removed by mistake, please contact Steam Support.
This item is incompatible with Pro Cycling Manager 2018. Please see the instructions page for reasons why this item might not work within Pro Cycling Manager 2018.
Current visibility: Hidden
This item will only be visible to you, admins, and anyone marked as a creator.
Current visibility: Friends-only
This item will only be visible in searches to you, your friends, and admins. 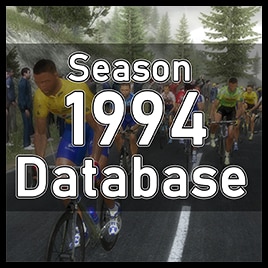 Stylus
Online
See all 5 collections (some may be hidden)

This item has been added to your Subscriptions. Some games will require you to relaunch them before the item will be downloaded.
Description
After the big success of the PCM17 edition, I'm more than delighted to announce the release of the 1994 Database for PCM18, an historical database created with the intention to fully simulate the 1994 season. Compared to the PCM17 edition you will have more cyclists, photos, more realistic transfers and a racing calendar closer to reality (the big riders will also run small races in preparation for major events)

Just a remind for who not remember or who have not followed that great historical season: I can consider the 1994 a transitional year between the old and future champions of this sport. The spanish Miguel Indurain was still one step in front the others winning 4 in a row Tour de France fighting against 90s rivals as Rominger, Ugrumov, Bugno and Chiappucci, but there were new great names the started to light up the cycling panorama too. During the Giro d'Italia won by the one-hit wonder Evgeni Berzin, Marco Pantani broke in the cycling world by winning 2 mountain stages, while Richard Virenque conquered his first pois jersey in Tour de France. Old legends like Greg Lemond and Sean Kelly were in the last year of career while young sprinters as Mario Cipollini and Erik Zabel had their first important victories. Last but not least, both Giro d'italia and Tour de France presented interested routes with some of the hardest stages of the history: I can quote Merano - Aprica or Le Bourg-d'Oisans - Val Thorens.
These and more other reasons to play and enjoy with this that I consider one of the most complete historical database for PCM18

If you want to have the same head effect of the screenshots you must install the following files:

- Download the folder "3D" : (http://www.mediafire.com/file/97103x5w504tf0c/3D.rar/file) - Due to legal Steam restriction it's necessary copy&past the link in your browser. I assure you It doesn't create any problem neither to your PCM and is fully compatible with all the Mods.
- Copy or move in your PCM18 main directory (usually: Program Files (x86)\Steam\steamapps\common\Pro Cycling Manager 2018\)
- Past and replace files when requested.

Pro Cyclist Mode - Training display
The game seems affected by a sort of millenium bug, and if you play pro cyclist mode you will see in the training board on the main page a weird blank white line. Anyway this doesn't mean that the training is bugged, in fact if you go in the training section you will correctly display the fitness curve and the form.

Dédié à
Franco Ballerini
Fabio Casartelli
Alessio Galletti
Marco Pantani
Antonio Martin Velasco
FranK Vandenbroucke
..and to all those who contributed to made our childhood cycling memories so special and are pedaling along the sky now.

BillyMyers Jun 7, 2019 @ 3:18am
hi, crash the game always in pro cyclist mode in the end of the first season and i cant continue the game? or is it fixed