Greenlight > Games > Nyphur's Workshop
Greenlight is being retired. For more information on how to submit games to steam, refer to this blog post.
This item has been removed from the community because it violates Steam Community & Content Guidelines. It is only visible to you. If you believe your item has been removed by mistake, please contact Steam Support.
This item is incompatible with Greenlight. Please see the instructions page for reasons why this item might not work within Greenlight.
Current visibility: Hidden
This item will only be visible to you, admins, and anyone marked as a creator.
Current visibility: Friends-only
This item will only be visible in searches to you, your friends, and admins.
Predestination
Description Discussions7 Announcements15 Comments558 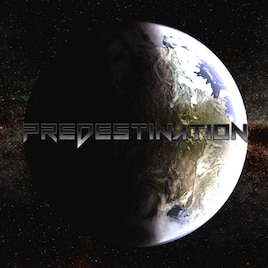 Tinabeans
Online
See all 70 collections (some may be hidden)
Kickstarter

View Predestination in the store

AND WE'RE LIVE! grin emoticon Click the link below to purchase our Early Access alpha on Steam now.

As I mentioned recently in a quick progress update on the blog, the Early Access Alpha version of Predestination is now complete. We were stumped for some time by some unexpected bugs, such as the Galaxy AI not colonising planets, some AI races not leaving their home planets or building defenses, and a bug that let you ignore ships and starbases in orbit of a planet and bomb it anyway.

We’ve even had the planet suddenly taking off and chasing ships around the map in fleet combat and user interface elements flying off the screen! Suffice to say, squashing bugs has been priority number one in the studio: we know you are patiently waiting to get your hands on the game.

We’re happy to report that Predestination’s alpha build is now all fixed and ready to go!

As promised, everyone who has pre-ordered the game or pledged to the pre-order tier or above on Kickstarter will be offered access to the Early Access before it’s launched to the public. We’ll be rolling out the Early Access release later this week, starting with emailing everyone a link to a web-installer you can launch from our own webservers.

Our beta backers ($40+) will automatically be sent a Steam download key shortly thereafter, but if you are a different kind of backer and want your copy to be delivered via Steam, please fill out the Steam Key request form. There’s some red tape to cut through before we can release on Steam and generate keys, but we’ll aim to get your keys to you by the start of next week.

Below is an updated FAQ on the rollout process, but if anyone has any other questions or concerns, please email tina@brainandnerd.com and let us know!

Q. What features will be in the Early Access?

A. The Early Access release is the first fully playable vertical slice of Predestination’s sandbox game mode with all of the major gameplay elements (Galaxy Management, Planetary Colonisation and Fleet Combat) tied together. You may have played the modular beta tests of each of those parts individually, but this is the first time they’re fully integrated. We’re calling this an Alpha release as it’s still missing major features, optimisations, and models. It’s also not polished and you may not necessarily find it very fun to play at this stage, and it may still contain some bugs that prevent play on some computer systems.

We’re releasing it as an Early Access release now because it’s ready for feedback from all of our supporters and to begin the iteration process. In the next few days, we’ll be starting a live updated development thread including a report of all the features that are in the early access version and those that are still to be added at a later date. The thread will help everyone keep track of development progress and what’s coming in the next big version update so that we’re 100% transparent and keep fans informed.

A. In order to be fair to our existing backers who have supported us so kindly at such as early development stage, we’ve decided to make the Early Access version and the final release price higher than the Kickstarter pre-order tier and price. We’re considering a price point of £25 GBP or $30 USD, which matches up with other indie space 4X launch prices and works out to 50-60% more than Kickstarter backers paid after tax. This will also ensure that previous backers will have paid less for the game even if we go on sale up to 33% off. As we’ve previously promised, the Free DLC For Life offer that most existing backers bought into will not be offered again as this was an exclusive bonus only offered while we were on Kickstarter and at QCon. Paypal pre-orders were also stopped this month.

Q. Do Beta backers get anything extra now that we’re entering Early Access?

A. Beta backers will continue to get access to major updates shortly before anyone else, including beta access to all DLC packs, the 3D Ship Designer tool, and any modding and mission designer tools we create. In order to make sure all Beta tier backers from our Kickstarter campaigns got good value for money, we deliberately added a second bonus pre-order copy of the game to that tier. As we recently announced, we’re also upgrading that copy to a full free-dlc-for-life copy as our way of saying thank-you for helping us refine the gameplay up to this point.

Thanks once again for all of your support! If you’re a backer, keep an eye out for our email later in the week for your link to the Early Access and instructions on getting started!

Most 4X games focus on one or two areas of gameplay, neglecting deep colonisation or combat mechanics, but with Predestination we really want to deliver the whole package in a well-rounded strategy game. Predestination will be an evolutionary step forward for the genre. There will be enough depth to keep hardcore players entertained and some simple tools like our unique colony blueprint system to solve the micromanagement problems deep games inevitably encounter.
- Create multiple colonies on each planet and design your own city layouts.
- Design re-usable colony blueprints to reduce micromanagement without sacrificing control.
- Manage dozens of colonies at once by editing existing blueprints.
- Send spies to infiltrate specific enemy colonies, and strategically bomb colonies from orbit.

Nyphur  [author] Feb 4, 2015 @ 6:13pm
Cross Cowboy, if you pre-ordered the game please fill out the form at http://predestinationgame.com/steamkeys and we'll get you one sent out ASAP! We've got hundreds to send out and are working through them as fast as we can in the order the requests arrived!

Nyphur  [author] Feb 1, 2015 @ 2:31am
@ttavoc: Turns out the Steam delay is my fault as I had not set prices in the back-end, so now we're just waiting for Valve to approve our prices and I think then we can push the button! I can confirm that we have a dev version running through Steam and it all works perfectly. I can't wait to get this launched and get some feedback and bug report threads going here on Steam in addition to our forum!

ttavoc Jan 31, 2015 @ 2:19pm
To be honest: That is annoying. I dont blame the devs of this game. I blame steam. 6 days for an approval process? Without any informations for the devs or customers waiting? Poor. Very poor.

Predestination has been Greenlit and is now listed in the Steam store. For the latest information, purchase options, and discussions for Predestination, please see it on the Steam Store or in the Steam Community.
Visit Store Page
For more details Visit Community Hub
For latest discussions
If you really, really want to, you can continue to the Greenlight page. Information on this page may be out of date, since all the action has moved to the areas noted above.