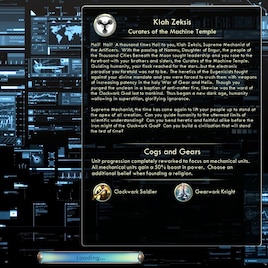 3 items
Description
A unique super-culture possessed of superior mechanical technology and game-breaking advantages. Please note that this civ is NOT balanced against the others in the game. Only use it if you want serious advantages against the game. Alternately, set it as your foe for a truly daunting challenge.

New Leader: Play as Klah Zeksis, Supreme Mechanist of the Artificers. Due to my lack of artistic ability, the part of Klah Zeksis will be played by Bismark of Germany.

New Trait: Cogs and Gears - Unit progression has been completely reworked to focus on mechanical units, Mechanical units are now 50% stronger than normal. Additionally, the superior spirituality of the Artificers allows you to select an additional belief when founding a religion.

New Building: Machine Temple - The cornerstone of every Factory-City, this replacement for the Shrine provides an early-game boost with a +4 to faith, growth, production, and science. It also promotes faster generation of Great Engineers.

Note: In addition to Gods and Kings, this mod also uses resources from the Korea DLC. This is required for the mod to function properly.

Q: Is there a Brave New World version of this mod?
A: Indeed there is. Due to popular demand, I updated the Artficiers for Brave New World, including adding the Siege Tower to their troop complement, replacing the Horseman.

Q: I have installed the mod and activated it correctly, but Klah Zeksis isn't showing up under the list of leaders.
A: I've done some digging around the internet and it seems like this is a not-unheard-of problem with Civ 5 custom civilization mods in general. First, ensure that you have the Gods and Kings expansion installed and activated. If that does not work, try to unsubscribe the mod, clear your cache, and then restart Steam and re-subscribe to the mod. If you've done it correctly, the game will re-download the mod. If this does not work, then you have my apologies, but I have been unable to find any other solutions to the problem.
< >
22 Comments

LeafyGrove Mar 1, 2018 @ 9:31am
@lordnequam - Your website is no longer accessible there is just a login page and nothing else. I get a "Page not found" on the site when trying to access "http://www.jessejackjones.com/mods" .

NoLevee Jun 26, 2014 @ 11:07am
After all of your fine work on the land units, I find that I prefer the naval units, not least because I don't have to look around for so much coal. For that reason, I save this civ for those times when I load a map that has lots and lots of water.

Nyxu Nov 30, 2013 @ 6:44pm
Oh its cool man, I really like all the three civs you've made. I am eagered to see the next work, so please take your time! Their stories are quite lovely, I tried looking them up and find nothing because I am such a curious rat. Really you've done awesome works of art in mod making well to me. So thank you for answering my question and have fun creating.

lordnequam  [author] Nov 30, 2013 @ 10:08am
@Equinexsickle - All three civs (along with a fourth one I work on every once and a while called the Fabricators) share an interrelated backstory. It's nothing really important to the game; something I throw in more for myself and anyone that cares. I don't really have the time right now to develop it much more than that, though, so I probably won't be coming out with a scenario any time soon.

Nyxu Nov 28, 2013 @ 4:49pm
Do any of these civs connect with each other? Ever thinking on making a scenerio with all three of them but still put them as a separate mod for each so you can play as them indivually? It would be intreasting.

lordnequam  [author] Nov 4, 2013 @ 5:48pm
@AirtightSprings3 - It's done in ModBuddy. You can find a really good walkthrough (the one I used when making my Civs) here [forums.civfanatics.com].

Aphelion Oct 20, 2013 @ 10:39pm
i said the same thing for your dna based mod (which is brilliant!):
see if you can get some pics.
for the clockwork knight you could use a pic of the clockwork knight from dont starve (dont forget to add copyright though)
great mod though!
< >