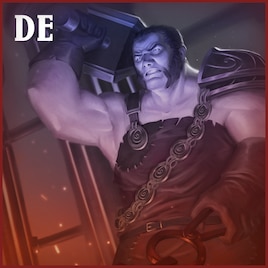 12 items
Description
If you're seeing skill icons as question marks, please make sure you've downloaded and enabled my Shared Library mod - it is required!
The Blacksmith can strike devastating blows with his two-handed hammer and also repair the armor of his friends. Blacksmith skills augment and require Warrior skill. Blacksmiths can serve as tanks while maintaining some support abilities.

* Rubber Mallet - 2 AP, 3 CD, 75% damage
Throw a hammer from your workbench, causing physical damage to two enemies and setting Dazed for one turn. Has a very low chance of Knockdown.

* Smithy Shrapnel - 1 AP, 5 CD
Toss a pile of sharp metal scraps, like nails and gears, for your enemies to step on.

* Into the Fray - 2 AP, 4 CD, 50% damage
Jump to a target position, doing physical damage to surrounding enemies and knocking them down.

* Elemental Infusion - 1 AP, 5 CD
Your ironworking abilities have sufficiently advanced to allow you to target Surface in melee radius and add elemental damage for one turn, corresponding to the surface you targeted.

* Forced Retreat - 2 AP, 4 CD
Blow hot air from your bellows, pushing all non-allied characters in a cone in front of you by 6m and making enemies Warm.

* Broken Wrist - 2 AP, 5 CD, 75% damage
Break your foe's wrist, causing them to drop their weapon and be Disarmed for two turns.

* Backbreaker - 2 AP, 4 CD, 100% damage
Breaking your enemies back leads to pain if they try to move. Lowers dodging by 25% and movement by 50%, and removes Encouraged.

* Medic - 2 AP, 5 CD
Patch up a nearby ally (+75% vitality) with your knowledge of field medicine, allowing them to return to battle.

* Berserker Stance - 1 AP, 6 CD
Reduce your physical armor in order to improve your damage and your movement speed. Clears Crippled, Weak and Slow statuses. Grants immunity to Charmed and Taunted.

* Iron Mask - 2 AP, 4 CD, 100% damage
Craft an iron mask and shackle it onto your enemy, causing physical damage and setting Suffocating and Muted for three turns.

* Stunning Strike - 3 AP, 4 CD, 100% damage
Supercharge your weapon with the power of the storm, dealing physical damage and forking lightning.

* Vulcan's Power - 3 AP, 6 CD, 2 SP, 110% damage
The god of smithing grants you the power to deal physical damage and knock down enemy characters in the area around you in his name. Creates fire surfaces randomly in the radius.

* Level Up Weapons - 1 SP
At level 6 (provided you have learned Sundering Smash) you will gain this new innate skill, which sets the target's on and offhand weapons to their current level.

* Level Up Armor - 3 SP
At level 12 (provided you have learned Sundering Smash) you will gain this new innate skill, which sets the target's Helmet, Chestpiece, Gloves, Belt, Leggings and Boots to their current level.


Notes
This mod includes physical-armor-resisted versions of the Stunned, Weak, Blind and Slowed statuses. These are extra and do not replace the original statuses.

Starter Class
The Blacksmith starts with a two-handed mace. They have the Opportunist talent; 1 point each in Two-Handed, Warrior and Bartering; 2 points in Strength and 1 point in Constitution.

Trader
The blacksmith trader's name is Vadderung and he can be found in the following places:
* Near Nebora the tinkerer (by the Fort Joy gates)
* By the armorer's stall in the Driftwood square
* Next to the blacksmith's sign near the town crier in Arx
* Belowdecks on the Lady Vengeance near the blacksmithing equipment

the man Jan 5 @ 8:30am
"Into the Fray" affects allies, also. Both the damage and knockdown.

Trying some of your creations, I have been attracted by the Blacksmith.

It seems to be pretty cool. But I have a question, is it normal in the description of skills it is said that they scale with Intellect instead of Strenght?

Sparktite Jul 20, 2021 @ 7:20pm
So whats the point of upgrade weapon and upgrade armor? Sets to the same level as it already is? Whats the point of not changing the level of an item in the form of a skill?
< >