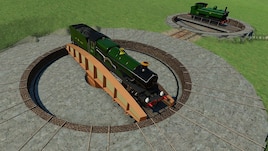 JK
Offline
See all 138 collections (some may be hidden)

This item has been added to your Subscriptions. Some games will require you to relaunch them before the item will be downloaded.
Description
3 GWR & British turntable animated scenery assets with a selection of engines to populate them. For scenery only, do not expect it to function as a real turntable in the game, that is impossible. The preset animation will slowly rotate the selected engine around and then back to the original position over about 12 minutes. Trains cannot drive onto or through the asset versions.

The 3 turntables are also available as Cargo Station versions (without engines or animation) and can be used as a destination in a route like a normal station (but will not transfer cargo). Trains can drive through or onto the turntable via the 2 preset connections (indicated by switch boxes next to the track).

Both versions have the choice of the the number of Connecting Tracks, which normal tracks will snap to the ends of.

The options can be changed after the turntable is placed (click on it, then the Upgrade button). If lots of tracks are connected this will prevent the upgrade, delete the ones highlighted red until the game allows it. The Asset version cannot be upgraded to the Station version or viceversa, they must be deleted and replaced manually.

This turntable mod does not contain the files for engines (to reduce size etc), instead it will load them from the engine mods if they are installed (and their load order is after this mod). If it cannot find the engine files, it will fall back to it's own dummy files which prevents a file-not-found crash, in this case no engine is shown on the turntable. So it is safe to add or remove engines used by the turntable at any time (provided they are not in use elsewhere by the game). And you don't need to install all the engine mods if you don't want to use them on the turntable. The turntable can be removed from the game, if all turntables are deleted, without affecting the engine mods it can use. This also means if more engines are added to this mod in the future, they will automatically appear in the lists of any existing turntables.

IMPORTANT :- You must load this turntable mod before the engine mods, otherwise they are not show when selected ! (See the screenshot above for how to do this.)

Examples of some the turntables can be seen in this video: https://www.youtube.com/watch?v=luRIgvPHt6U


This mod utilises base game textures and the LNER A3 & A4 engines, all credit for these is to Urban Games.

The operating concept for the station version is based on the ZigZag Staion mod, credit to the original author: https://steamcommunity.com/sharedfiles/filedetails/?id=806578620
(The mod not is required to for this one to operate, but they should not conflict if both are used.)

If you want a turntable with built-in roundhouse depots, see this mod: https://steamcommunity.com/sharedfiles/filedetails/?id=965941365
(The mod not is required to for this one to operate, but they should not conflict if both are used.)
< >
45 Comments

Chris Packham Jun 17 @ 8:08am
if anyone know anyone who does trains please recommend the Gatwick express and thames link train, maybe the 158 west coast train, This turntable fantastic.

KMDolph May 14 @ 4:40pm
@JK awww www. ... This makes me sad lol
Appreciate your hard work though. Love your other packs you've already managed to put on TF2. Already using multiple packs of yours.
Hopefully Turntables and Round Houses come soon :)

JK  [author] May 13 @ 9:52am
@KMDolph - Thanks for the feedback. It's bit of a way down the list at the moment, but I should get to it eventually. Bridges are next.

KMDolph May 13 @ 4:49am
JK! Please get this turntable asset pack onto Transport fever 2!!!
I love this asset pack and really want to use it in TF2

JK  [author] Sep 21, 2019 @ 5:18am
@power man - I've just checked in my game, I have a GWR 4073 on a turntable AND used as a placeable asset AND running on multiple lines, with no issues. So I'm not sure why you're having problems. If you can specify which engine(s) it crashes with in your game, I can investigate further.
The statement "So it is safe to add or remove engines used by the turntable at any time (provided they are not in use elsewhere by the game).", is talking about adding or removing mods from the save game. It's saying, the game won't crash because an engine mod is removed whilst still in use on a turntable (since the turntable will fall back to its own dummy file and show nothing on the turntable). And is saying, but it will crash if the removed mod has the engine being used on a line etc, as is normal behaviour for all mods. Hope that clarifies it better.

power man Sep 16, 2019 @ 8:53am
since you said it's safe to add or remove engines on the turntable provided they're not in use elsewhere by the game

power man Sep 16, 2019 @ 8:50am
i had load order set correctly, but i tested to see if i could run my locomotives on a line and use the same engine on the turntable,

it would result in a crash if i tried, since it was not recommended in your instructions

JK  [author] Sep 15, 2019 @ 6:40am
@power man - Which engines is it crashing for? Do you have the load order correctly set (see screenshot above), so the turntable mod loads before the engines?

power man Sep 15, 2019 @ 2:59am
it would be nice if we could run engine models at the same time as they're on the turntable, it crashes when i have the same models on lines as well as on the turntable or when i place them as asset