Store Page
Space Engineers >  Workshop > Meridius_IX / Lucas's Workshop
This item has been removed from the community because it violates Steam Community & Content Guidelines. It is only visible to you. If you believe your item has been removed by mistake, please contact Steam Support.
This item is incompatible with Space Engineers. Please see the instructions page for reasons why this item might not work within Space Engineers.
Current visibility: Hidden
This item will only be visible to you, admins, and anyone marked as a creator.
Current visibility: Friends-only
This item will only be visible in searches to you, your friends, and admins. 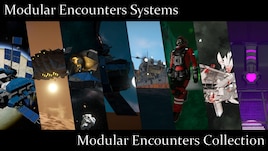 This item has been added to your Subscriptions. Some games will require you to relaunch them before the item will be downloaded.
In 2 collections by Meridius_IX / Lucas
Modular Encounters Collection

59 items
Description
What is Modular Encounters Systems?
This mod was designed to be a flexible framework that will handle nearly all spawning of NPC grids in your game world. It also includes a behavior system that NPCs can use to engage with players and the environment in unique ways. The mod was built to be compatible with existing NPC mods, while also providing new and powerful options to add extra variety and control to how NPC grids appear in the game.

Simply run this mod with any other mod(s) that add NPC grid encounter content (Eg: Reddit Custom Encounters, Air Traffic, Surface Occupation, Etc). This mod will identify the spawn groups included in those mods, regardless of whether or not they were setup to use the advanced features of this mod.

Because this mod is a framework, it does not add any NPC encounters to your world if you load it by itself.

Why Was This Mod Created?
Previously, this mod was two separate framework mods called Modular Encounters Spawner and RivalAI. Previous to those mods, there were two older framework mods that controlled spawning for Planetary Cargo Ships and Planetary Installations.

All of these framework mods were difficult to manage as separate mods, so a decision was made to merge them all into a single framework. Not only does this make it incredibly easier to maintain the project, but it also makes it a lot easier to create new features for use in future NPC encounter mods.

This new single framework was designed to be backwards compatible with all existing NPC encounter mods that were using the older frameworks. Because this framework replaces the limited functionality of some in-game spawning systems, the following world options will be Automatically Turned Off when using this framework:

What Does This Mod Handle?
This mod will take care of the spawning and despawning of several types of NPC grids.

Other Compatibilities
The framework also adds several APIs from other popular mods so that encounter mods can take advantage of their added functionality. This includes (but isn't limited to) the following:

Configuration and Modding
This framework contains several configurations and tools for administrators and modders. The majority of the details can be found at the Modular Encounters Systems Wiki, located Here[github.com]

Restrictions Regarding Republishing This Mod:
Please refrain from republishing this mod on the workshop or anywhere else. Because this mod is used as a dependency by many other mods, it will likely auto-load this mod with any cloned instance - which will cause unstable behavior as a result of 2 instances of the spawner running. If this is not respected, I will exercise my right as the original creator and file DMCA notices against infringing copies at my discretion.

Resources
Looking for Config / Admin Options? Having Issues with the Mod? Want to Find Resources for Making Your Own Encounter Mod? Click Here![github.com]

Want to Support My Work? Check Out The Patreon Page![www.patreon.com]

does anyone else have the same issue with a decated server
booooooo
< >
2,407 Comments

To disable the inhibertor blocks? not sure what ObjectBuilderTypeHere means in the context

The Pikeman Jan 25 @ 2:03pm
Hello I been using in my save this modification https://steamcommunity.com/sharedfiles/filedetails/?id=1139262497 and I wanna know if my save will broke up if I add to one of the mods that you made that adds cargo ships, stations, enemy factions, etc. I suppose the only one that will have problems will be the ones that suppreses vanilla encounters but the ones I wanna add are the ones that add enemy factions as I've told you before. Thanks in advance for the answer.

REV4666 Jan 24 @ 11:31pm
How does MES handle multiple sets of static weapons ex: 2 autocannons and 2 rails can you configure it to use the rails on large grids and autocannons on small grids?

The Talented Wilford Brimley Jan 18 @ 2:01pm
If I accidentally checked Enable Spiders and Enable Wolves then saved the config and started the server, will there be any issue if they are unchecked? Using Torch UI.

CarlVon Jan 10 @ 4:10am
Is there any way to stop the combat while all players are logged off the server? Thank you.

Vargali Jan 9 @ 2:44pm
i asked a while ago if there were plans to have build-able versions of the inhibitors for multiplayer reasons... i also remember you were thinking about it... is that still a possibility....

PuggleLeDog Jan 8 @ 6:27pm
You get rid of the inhibitors by shooting them until they break. As for finding who thought of them, I cannot help you there.

Ren'Dahu Nation Jan 8 @ 6:17pm
is there a way to get rid of jump drive inhibitors and find the person who thought them up at the same time.......for...reasons