Store Page
Transport Fever>  Workshop > Maik [Ger]'s Workshop
This item has been removed from the community because it violates Steam Community & Content Guidelines. It is only visible to you. If you believe your item has been removed by mistake, please contact Steam Support.
This item is incompatible with Transport Fever. Please see the instructions page for reasons why this item might not work within Transport Fever.
Current visibility: Hidden
This item will only be visible to you, admins, and anyone marked as a creator.
Current visibility: Friends-only
This item will only be visible in searches to you, your friends, and admins. 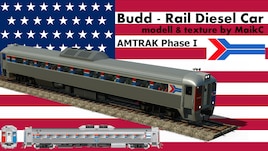 Maik [Ger]
Offline
See all 95 collections (some may be hidden)

This item has been added to your Subscriptions. Some games will require you to relaunch them before the item will be downloaded.
Description
The Budd Rail Diesel Car, RDC or Buddliner is a self-propelled diesel multiple unit (DMU) railcar. Between 1949 and 1962, 398 RDCs were built by the Budd Company of Philadelphia, Pennsylvania, United States. The cars were primarily adopted for passenger service in rural areas with low traffic density or in short-haul commuter service, and were less expensive to operate in this context than a traditional diesel locomotive-drawn train with coaches. The cars could be used singly or several could be coupled together in train sets and controlled from the cab of the front unit.
Technical Details:
- Vmax : 85 mph
- Power : 410 kW
- Traction : 150 kN
- Seats : 90
- Availability : 1949 to 1969

Authors:
MaikC (Modell+Textur) ,
If you like our mods give it a thumbs up or even a small donation for the authors.
paypal.me/MaikC4TPF

Disclaimer:
Reusing the files or creating a repaint need my written permission.
Uploading this modification on other pages is not welcome.
< >
12 Comments

WORTHwhile Sep 22, 2018 @ 8:24am
love the budd RDC mate, is it possible to get an Australian National livery? to make an aussie happy!